Serious stabbing attacks at lowest level in over a decade 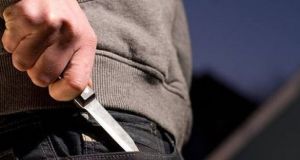 The number of serious stabbing attacks in the State has fallen significantly despite concerns about knife crime being on the increase, according to the unpublished medical data.

While the number of knives seized in the past two years has increased by 60 per cent, the number of knife attacks resulting in a person needing in-patient treatment for their injuries were at their lowest level for more than a decade.

Data obtained by The Irish Times from the HSE shows the number of knife attacks that necessitated the victim being admitted to hospital has declined 40 per cent since its peak of 2006.

The figures obtained from the HSE show the number of patient admissions to Irish hospitals for knife attacks between 2005 and last year, when there was a total of 164 cases. The highest number of hospitalisations following knife attacks was 269 in 2006.

The figures relate only to serious injury from knife attacks. They do not include less serious incidents after which victims would have been treated in A&E departments rather than being admitted as an in-patient.

The data would seem to support claims from some within An Garda Síochána that the increase in knife seizures has occurred because Garda numbers are rising. The same sources say that, because there were more gardaí than ever on the beat, more stop-and-search operations were being conducted and so more knives were being found.

Concerns had been expressed recently after a series of stabbings in a single week last month, including one incident in which a Leaving Cert student from south Dublin was killed.

In the lead-up to those attacks, figures emerged from the Department of Justice confirming a significant increase in knife seizures.

It said the number of knives being seized across the country had risen by 60 per cent in three years; from 1,197 in 2016 to 1,936 last year. Figures obtained from the Garda reveal half of that increase was spread across the six Garda divisions that cover Dublin city and county.

Those figures, combined with a series of knife attacks that garnered significant media attention, gave rise to concerns knife crime was increasing.