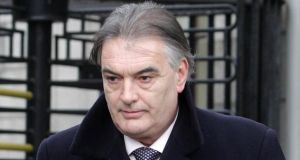 Ian Bailey is suing the State for damages in relation to his alleged wrongful arrest during the investigation into the murder of Sophie Toscan du Plantier . He has always denied any involvement in the murder. Photograph: Niall Carson/PA Wire

The High Court has ordered the Garda Siochana Ombudsman Commission (GSOC) to disclose documents relating to complaints by Ian Bailey over the Garda investigation into the 1996 murder of French film maker Sophie Toscan du Plantier in west Cork.

The documents include memos and interviews in the possession of GSOC in relation to Mr Bailey, his partner Jules Thomas, and two other people interviewed by gardai, Marie Farrell and Martin Graham.

Mr Justice John Hedigan ordered GSOC to provide the documents within 12 days along with a questionnaire filled in by Ms Farrell in January 1997.

The order was sought by the State in advance of next month’s trial of Mr Bailey’s action for damages in relation to his alleged wrongful arrest during the murder investigation. He has always denied any involvement in the murder. His partner, Ms Thomas, is also suing the State.

James B Dwyer BL, for GSOC, said his client was not in a position to provide all the documentation sought before the full trial in front of a judge and jury begins next month due to limited resources.

Paul O’Higgins SC, for the Garda Commissioner and the State, said the matter could be dealt with if disclosure was initially limited to the material relating to Mr Bailey, Ms Thomas, Ms Farrell and Mr Graham which is unlikely to be more than 20 documents.

If there was a question over whether privilege was being claimed over those documents, that could be dealt with in two weeks and depending on the outcome of that, the question of discovery of other documents could then be addressed, he said.

The judge said discovery of the material should be of the initial material within 12 days and the remainder within four weeks. The documents are to be supplied to both sides in the action.

Today’s hearing dealt with a number of pre-trial matters in relation to discovery in advance of the trial.

The court heard Mr Bailey was seeking further discovery of documents from the office of the DPP but counsel for the DPP, Sunniva McDonagh SC, expressed concern that the additional material was too general and would involve allocating resources to trawl through thousands of documents.

Martin Giblin SC, for Mr Bailey and Ms Thomas, said it was not a fishing expedition because, thanks to material already supplied by the DPP “the fish had been caught”. His side was basically seeking an assurance that there was “nothing else” that they should have in preparation for the trial.

Following exchanges between Ms McDonagh and Mr Giblin, the DPP agreed to make further discovery in relation to certain categories of documents but not in relation to a more general category.

The court also heard the State side was seeking more specific information about Mr Bailey’s income before and after his arrest in 1997 in order to be able to properly defend his claim for aggravated damages.

A dispute over the admissibility at the trial of tape recordings made by people calling Bandon Garda station in Cork during the investigation was also resolved today.

Mr Giblin said the State was refusing to admit certain tapes. However, Mr O’Higgins said all the State was saying was that having reviewed transcripts of the tapes, it could not stand over the accuracy of how some words spoken in them had been transcribed due to the antiquity of the tapes which had to be transferred into digital form.

After Mr O’Higgins said the original tapes could well be played at the trial and it would be a “technical tour de force” if they were, the judge asked Mr Giblin if he was happy with that and counsel said he was.