SF leader can now be held until 8pm on Sunday, four days after detention began

Boston College researcher Ed Moloney Moloney has said it could be difficult to link Gerry Adams to the killing of Jean McConville given that Boston project participants Brendan Hughes and Dolours Price, have both died. Video: Reuters 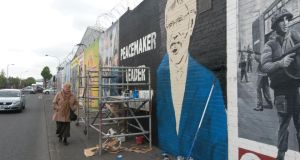 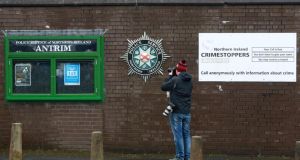 Gerry Adams has spent a second night in custody at Antrim police station. Police are questioning the 65-year-old politician about the killing of Jean McConville in 1972. Photograph: Paul McErlane

Gerry Adams’s period of detention for questioning over the murder of Jean McConville in 1972 has been extended for another 48 hours.

Police in Northern Ireland had sought to extend the detention of the Sinn Féin leader after he had already been held since Wednesday evening.

Mr Adams can now be held until 8pm on Sunday, a full four days after his detention began.

An application to extend the Sinn Féin president’s detention was made to a Belfast court by the PSNI at 4.30pm today.

A senior member of the investigating team at the police serious crime suite at the Antrim PSNI base where Mr Adams is being held gave evidence to the court by video-link.

The PSNI had until this afternoon to seek court approval for an extension to questioning Mr Adams beyond 8pm this evening.

Mr Adams can be held for a maximum of 28 days, but no one has been detained for anything like that length of time under the legislation.

Detectives who have been questioning Mr Adams require court approval to detain him for more than 48 hours.

That approval has to be sought and given in advance of the 48-hour time limit.

It is further understood that an application should be made within normal court hours.

Officers at Antrim police station have been questioning the Sinn Féin leader since Wednesday about the killing of Jean McConville in 1972.

“There is a cabal in the PSNI that have an agenda, a negative and destructive agenda to both the peace process and to Sinn Féin.

The former IRA commander said it may be difficult to contain anger among Irish nationalists about the arrest.

“We believe that the anger and resentment out there among the community is something we as Irish republicans have to manage. We are trying to handle this situation in a very calm way,” Mr McGuinness said.

“It is not for me to comment on the [Adams] issue. That is to be taken by the police, to be taken by them on the basis of the information available to them in circumstances with the involvement of the judiciary – it’s certainly not something I should comment on.”

“I have seen no evidence in the four years that I have been Minister [for Justice] of policing being operated on a political basis. I have certainly seen plenty of evidence of politicians of different backgrounds seeking to interfere in policing.

“If there are dark forces within policing I have seen no sign. I see a police service which has very high levels of confidence, higher than for the Garda Síochána or nearly any force in GB, and I see a police force that is carrying out its duties properly and appropriately, following up evidential opportunities when they present themselves and co-operating with the community across a range of issues.”

To extend Mr Adams’s detention this evening, a court had to be convinced by the police case that such additional time was both necessary and justified. Any additional leeway to question an individual is set by the court depending on the strength of the police case put before it.

The PSNI has two further options besides seeking yet more time to question Mr Adams. They can charge the Sinn Féin president or they can release him. He could be freed without condition, or he could be released pending the submission of a file to the public prosecutor’s office.

The international press, assembled in a small car park opposite the police base, had grown today in anticipation of developments in the case.

In addition to the Irish and British media, overseas media outlets including Al Jazeera sent a crew to Antrim. The swelling of the media presence reflects the growing international interest in the case.

Northern Secretary Theresa Villiers said today she was informed 48 hours before the arrest that the Sinn Féin president was due to be questioned by the PSNI.

Speaking in Belfast this morning, Ms Villiers said she “noted it and obviously started to think through the potential consequences”.

“There has been, and there will be, no political interference in prosecutions in this case,” she added.

“I don’t think we can expect the police, in their decisions, to take account of the electoral calendar.”

Reflecting the acute political and diplomatic interest in the case, Ms Villiers said the British government was “in touch with Washington, keeping them informed of the situation”.

Ms McConville’s eldest daughter told BBC2 Newsnight yesterday that she is prepared to name the people responsible for her mother’s death.

Forty-two years after her mother was abducted from her flat in west Belfast, Helen McKendry said she no longer feared reprisals by republicans.

“What are they going to do to me? They have done so much to me in the last 42 years,” she told BBC2’s Newsnight.

“Are they going to come and put a bullet in my head? Well they know where I live.”

Tánaiste Eamon Gilmore described the arrest yesterday as a “very significant event” but insisted parties should not seek to have different policing rules applied to politicians.

“This is a murder investigation that has been going on for some time and there is another person arrested and charged in this murder investigation,” said Mr Gilmore. “I don’t think Sinn Féin or anybody else should seek to have a different rule applied to someone because they are a politician.”

He said that when the police want to interview somebody over a murder investigation “they are perfectly entitled to do that”.

“If that person happens to be a politician or leader of a political party, so be it,” he added. “There isn’t a separate rule and I don’t think Sinn Féin, with all due respect, should be seeking some kind of separate rule to be applied here because the person is a politician.”