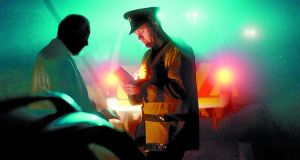 Numbers in the Garda Traffic Corps have plummeted, with nearly four out of every 10 members who were in the unit at its peak in 2009 now retired or deployed elsewhere.

The numbers remain near record lows despite the recruitment of more gardaí over the last 12 months and the pressure the Garda and Government has endured over road safety and road traffic law enforcement in recent years.

It has also emerged that since the Garda was given new powers at the end of June to arrest disqualified motorists who continue to drive despite being banned, more than of 500 people have been charged with the offence.

From June 25th to the end of October, 456 people were charged with driving while disqualified. Garda sources told The Irish Times that figure has now exceeded 500.

Deputy Garda Commissioner John Twomey told the Oireachtas Committee on Transport that the numbers of the Traffic Corps had dropped to 738 at present.

Garda enforcement The current strength of the unit, which spearheads the Garda’s enforcement of the penalty points system and drink-driving laws, as well as all other aspects of road-traffic enforcement, has fallen by 39 per cent since 2009.

Back then, the strength of the corps peaked at 1,200 at the same time numbers on the Garda generally reached record highs, at more than 14,500 following an accelerated recruitment drive.

However, the recruitment moratorium since then has seen numbers in the force drop to about 12,700.

Mr Twomey, the second most senior officer in the Garda, was appearing before the Oireachtas committee along with other senior officers and representatives from the Road Safety Authority (RSA) to answer questions on the low conviction rates for drink-driving.

Last month Department of Justice figures showed conviction rates were about 40 per cent, with the Garda officers and the RSA invited by the committee to appear before it and explain the trends.

The figures from the Department of Justice showed that between January 2013 and May 2015, more than 20,000 people were due before district courts for drink driving, and 6,709 were convicted (40 per cent). At the time a report in The Irish Times detailing the figures said the department pointed out the overall figures included some cases listed before the courts but not yet finalised, and some summonses that had not been served.

However, since then the Courts Service said it had established the average drink- driving conviction rate had been 85 per cent or higher in recent years. It suggested the Department of Justice figures had been misinterpreted.

In a footnote to its statement on its figures, the Courts Service acknowledged that it did not include “summonses that had been processed but did not proceed to prosecution or were struck out or withdrawn – as the courts did not get to hear any evidence, or decide upon the case”.

New measures Under the new measures, 7,700 fixed charge notices have been issued for using vehicles without an NCT and 3,529 notices were issued for non-display of L plates.

A total of 4,863 notices have been sent to learner drivers detected driving a vehicle without being accompanied by a fully qualified driver. In 165 cases, novice drivers were found to be driving without their N plates.

This year, the number of arrests and detections for drunk driving are on course to be at about the same as last year.

RSA chief executive Moyagh Murdock told the committee if current trends for road deaths witnessed to date in 2015 continued to the end of the year, it would be the lowest 12-month period on record.