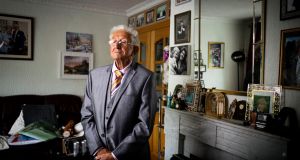 Comedian Sil Fox. The case against the 87-year-old was dismissed on May 27th. Photograph: Tom Honan

Comedian Sil Fox intends to sue the Director of Public Prosecutions and the State, after a sexual assault prosecution against him was dismissed in the Dublin District Court last month.

A letter sent to the DPP, the Garda Commissioner, the Minister for Justice, the State and the Attorney General outlines his intention to sue for breaches of his constitutional rights to liberty, privacy and his right to a good name. The letter also cites the “reckless infliction of emotional distress” and “serious reputational damages” he claims to have suffered.

The case against the 87-year-old was dismissed on May 27th because of inconsistencies between the complainant’s account of what happened on the night in December 2018 when she approached him in a Dublin bar for a selfie, and CCTV footage of the incident.

The complainant claimed that he put his left hand on her groin for 30-45 seconds as the photograph was taken. However, the CCTV footage showed his hand remained on the table throughout, other than for three seconds after the alleged assault was claimed to have occurred. Witness evidence did not support the woman’s account. “In the footage, there is no indication that something untoward occurred,” Judge Paula Murphy said.

“I didn’t expect this at 87. People say, ‘oh well it’s over’. But it’s not just a question of the case being over. It’s the effect the whole year has had,” Fox told The Irish Times.

He wants the law changed so that all those accused of sexual offences are entitled to anonymity during the trial. At a preliminary hearing in July last year, his application for anonymity or reporting restrictions was turned down. The legal correspondence claims this decision led to “intense media exposure”.

“Sil Fox was not entitled to anonymity because this was an alleged offence that’s deemed less serious” than rape or other sexual offences, said Belfast-based solicitor Kevin Winters, who is representing him.

“That’s a serious injustice and a gap that needs to be fixed. It shouldn’t be at the discretion of the court. There should be anonymity right across the board, and not just – as it stands at present – in the more serious sexual offences.”

The legal correspondence sent this week is seeking an apology from the DPP, damages and a judge-led inquiry into “inequities in reporting restrictions”. Mr Winters also plans to write to the Attorney General, An Garda Síochána, the Minister for Justice and the DPP to ask them to initiate that inquiry.

“The case that he has taken is necessary, but no amount of litigation will ever remove the stain that’s there as a result of this prosecution,” said Mr Winters. “Once prosecuted, the stain is there.”

1 Garda detective charged with making death threats against ex-partner
2 How fraudsters used lockdown to lure Irish victims into boats and caravans scam
3 Miriam Lord: Minister for Agriculture tries to get himself out of the manure
4 Martin criticises ‘over-focus’ on Border poll ahead of Foster meeting
5 Barry Cowen tells Dáil he is profoundly sorry for ‘stupid’ drink-driving offence
Real news has value SUBSCRIBE