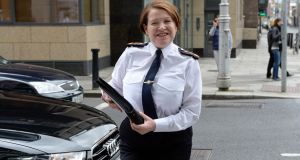 Garda Commissioner Nóirín O’Sullivan: “I am very, very confident that actually we have a leadership team who can deliver on this programme.” Photograph: Eric Luke/The Irish Times

Garda Commissioner Nóirín O’Sullivan has said future controversies that may arise in Irish policing will be met by a management team focused on cultural and systemic reform.

The commissioner was speaking at the launch of a Garda regeneration strategy, a response to 43 individual reports on the organisation.

The Modernisation and Renewal Programme 2016 - 2021 sets out several targeted areas – culture, victim support, technology, crime prevention and cyber crime among them – to which wholesale changes will be introduced.

Ms O’Sullivan said she welcomed her engagement with the Policing Authority in the aftermath of the recent O’Higgins commission dealing with the Garda whistle-blowing controversy. The authority had been highly critical of Garda culture.

Drawn on the impact of the controversy, she said: “What did the last couple of weeks do for me? It allowed me to challenge my own assumptions about myself, about my leadership of the organisation, and about the performance of the leadership team in the organisation.

“I am very, very confident that actually we have a leadership team who can deliver on this programme [of reform].

“I am not going to say it is all going to be without further controversy and further crisis but I certainly know that [Garda management] is up for this [reform process]. That’s what keeps us all buoyant when times get tough.”

The modernisation programme focuses strongly on an overall need to address cultural change. The report notes the force has been criticised as “insular and defensive”; for ignoring dissenting voices and constructive criticism.

Addressing this will include civilianising various policing duties particularly in the area of administrative bureaucracy.

The strategy aims to prioritise victims. Following consultation with other police forces including in Sweden and New York, it outlined a policy for investigating domestic abuse cases which includes quickly assessing risk levels and employing the skills of a domestic abuse investigator and multi-agency support.

“Crime scene kits” will be piloted, including digital cameras which allow gardaí to take evidence in cases where an initially reluctant victim later decides to make a formal complaint.

It has begun establishing “regional protective service units” for vulnerable people which it hopes to complete by the end of 2017.

This year Garda management plans to introduce a confidential phone line for victims of child sex abuse, either current or historical.

Based on research from New Zealand and Scotland, officers are setting up Community Policing Teams to enhance confidence in the service. There is an emphasis on engaging with minority communities.

A crime prevention strategy is in development and ongoing support initiatives include an increasing use of data analytics, including mapping and predictive techniques, and a new look at managing offenders with a view to minimising recidivism rates.

In the area of national security and organised crime, a new Schengen information system, planned for mid-2018 would facilitate status “alerts” on people, vehicles and property among EU member states.

There are also plans to enhance international collaboration in “targeting and disrupting national and international crime gangs and terrorist groups”.

Ms O’Sullivan said she was satisfied the presence of one Garda liaison officer in Spain was “enough at the moment” although the situation was under constant review. A contingent of Spanish police are expected to travel to Ireland for talks with gardaí this summer.