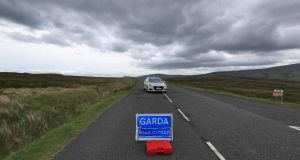 Gardaí on Old Military Road in the Wicklow Mountains where the remains of Patricia O’Connor were found. File photograph: Colin Keegan, Collins Dublin

Three people arrested in connection with the killing of grandmother Patricia O’Connor were released on Sunday.

A 73-year-old man was arrested in Co Meath and two women, aged 19 and 38, were arrested in Dublin on Saturday.

The three were detained at Bray and Wicklow Garda stations under the provisions of Section 4 of the Criminal Justice Act, 1984.

The Garda said files will be prepared for the Director of Public Prosecutions.

The scattered remains of Ms O’Connor (61) were found in the Wicklow Mountains on June 15th.

It is believed she was killed some time between May 29th and 30th at the family home in Mountain View Park in Churchtown, Dublin. She was reported missing on June 2nd.

She worked as a chef at Mount Carmel Community Hospital in Churchtown.