Gardaí believe they have identified driver who hit Dublin cyclist

Deliveroo riders held a vigil on Wednesday for their late colleague Thiago Cortes who was killed in Dublin on Monday night.The Brazilian had been working as a cycling courier for the food delivery company when he was struck by a car. 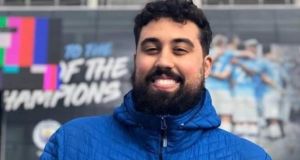 The Deliveroo cyclist Thiago Cortes who died after he was struck by a car in Dublin on Monday.

Gardaí believe they have identified the driver of the car which struck Deliveroo cyclist Thiago Cortes in a fatal hit-and-run on Monday night.

The driver is believed be a male teenager from the north Dublin city area who has a string of previous convictions.

No arrests have been made but a garda said the investigation is “progressing rapidly. The suspect is well-known in the local area,” they said.

Efforts are still ongoing to identify the three other occupants of the car. Gardaí have been aided in their inquiries by high-quality CCTV footage from near the scene of the incident on North Wall Quays.

It is understood the car, which was untaxed, uninsured and had no NCT was either stolen in the north inner city or purchased for a small amount of money solely for the purposes of joyriding.

It was travelling at speed at the time and Mr Corte suffered catastrophic injuries.

Joyriding in these so-called “company cars” has re-emerged as a major problem in north inner city areas recently, according to gardaí.

Mr Cortes (28), from Rio de Janeiro in Brazil, was cycling on North Wall Quay when he was struck by a car at about 10.30pm on Monday night. he was delivering food for Deliveroo at the time of the incident, having only started the job two weeks previously.

On Wednesday night over 100 friends and colleagues of Mr Cortes, including many food delivery workers, gathered in O’Connell Street for a vigil before marching to the scene of the incident and leaving flowers and candles.

There were brief, angry exchanges after a group of youths threw a firework and verbally abused the marchers. Gardaí at the scene separated both groups and the situation did not escalate.

Gardaí said rumours circulating on social media that Deliveroo drivers had marched to the address of the person they believed responsible for the hit-and-run were false.