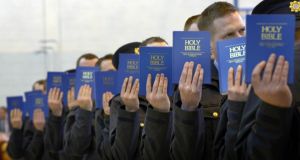 Garda Reserve recruits take their oaths: numbers peaked at 1,162 members in 2013 but have since declined to 789 members. Photograph: Brenda Fitzsimons/The Irish Times

Numbers in the Garda Reserve have fallen by a third and are now below 800 members, limiting the scope for the part-time force to assist when most full-time Garda members withdraw their service next month.

The Garda Reserve peaked at a high of 1,162 members in 2013 but has since declined to 789 members. Some 180 of those who were reservists in 2013 have since secured jobs as full-time Garda members while the other 200 have simply left the reserves.

This means Garda Commissioner Nóirín O’Sullivan would have much fewer reservists than believed to fall back on when full-time gardaí withdraw their services on the four Fridays of next month in a row over pay.

It is unclear how many reservists will be available on the four days of action or willing to work on a day when their full-time colleagues are effectively on strike.

Yesterday, the Association of Garda Sergeants and Inspectors (AGSI), which has lodged a pay claim of 16.5 per cent, has agreed to “tone down” the first phase of its industrial action due to commence today.

The AGSI was due to begin an accelerated programme of industrial action this morning, with its members refusing to log into the Garda’s computer database Pulse.

However, following talks with senior officials from the Department of Justice yesterday, the AGSI agreed to a request that its members involved in the processing of prisoners in Garda stations would use Pulse.

This means sergeants, who must take the lead role in processing prisoners, will perform that task as usual so suspects can be detained, released or charged and station bail issued.

However, other AGSI members will not log on to Pulse today. Next Friday they will again refuse to log on and will also refuse to perform administrative tasks.

On the third Friday of action, November 4th, its members will withdrew their service completely along with rank-and-file gardaí who are members of the Garda Representative Association (GRA).

Senior Garda management is today due to meet with a delegation of AGSI and GRA officials to discuss the contingency plan for the four days of proposed industrial action.

Assistant Garda Commissioner Eugene Corcoran is expected to lead the senior management team, although the commissioner was expected to return to Ireland from the US last night after attending a policing conference in San Diego.

The GRA and AGSI will be asked to make some of its members available for emergency response and skeletal frontline policing.

There are fewer than 400 Garda members at the rank of superintendent and higher. They are not involved in the GRA and AGSI’s four days of action. So the availability of even small numbers of AGSI and GRA members will be crucial for the contingency policing plan.