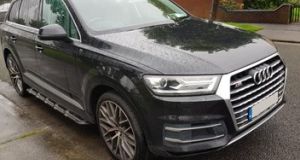 The Audi Q6 car that was seized by gardaí. Photograph: An Garda

A former associate of jailed gang leader Brian Rattigan has been targeted in Garda raids led by the Criminal Assets Bureau (Cab). Some €67,000 in cash and an Audi Q6 were seized on suspicion they represented the proceeds of crime.

The raid in west Dublin on Thursday was the second time in two months that former associates of Rattigan, who began the Crumlin-Drimnagh feud in Dublin by carrying out a stabbing killing, were targeted in pre-planned operations by the Garda.

Rattigan has been in prison since 2003. But as a murder conviction against him was overturned and he was convicted of manslaughter for the same killing, his release day is due to fall in November.

The suspected drug dealer targeted in Thursday’s raids is a Dubliner gardaí believe has been criminally active in the Tallaght area of the city. In recent years he has come to the attention of the Garda less frequently, though gardaí became concerned about his apparent displays of unexplained wealth and Cab began an investigation into him.

“This morning’s search operation is a significant development in an ongoing investigation into cash and other assets accumulated by a local organised crime group from the sale and supply of controlled drugs,” said the Garda.

The documents seized, and the phones, were due to be examined in an attempt to determine if the man targeted by investigating officers has other assets or cash hidden in Ireland or abroad.

Garda sources said when the target was younger he was a known associate of Rattigan (40), who has continued in his efforts to direct drug dealing from jail though he has been in prison for almost two decades.

He was convicted in 2009 of stabbing 21-year-old Declan Gavin to death in Crumlin in August, 2001, and was jailed for life. He successfully appealed that conviction, subsequently pleaded guilty to manslaughter and was sentenced to nine years in January, 2019.

In June, 2008, he was linked to a €1 million drug seizure in Dublin. In 2013, he was convicted of directing that drug deal from his prison cell and jailed for 17 years; a sentence backdated to June 2008, when the drugs were found.

At present Rattigan’s manslaughter conviction is served and though his drugs conviction is keeping him in prison, when remission of 25 per cent is included, he will be due for release.

Greens to hold online meetings over EU-Canada trade deal 04:45
Tusla failed to respond to teen’s ‘high priority’ case before death 04:03
Sinn Féin says Varadkar’s excuse for leak is ‘in tatters’ 03:01
Passengers without valid PCR tests could face compulsory quarantine 01:44
Special schools may be permitted to reopen on a voluntary basis 01:15