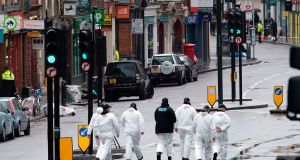 Gardaí were last night questioning a second man linked to Rachid Redouane, one of the London Isis killers.

The arrested man was detained in Wexford by members of the Special Detective Unit, and a property was also searched.

His detention came less than 24 hours after man was arrested at a Limerick address in an operation carried out by the Garda National Immigration Bureau.

Gardaí believe the Limerick suspect had been using documentation and the PPS number of Redouane (30).

And as with that operation, the suspect detained on Tuesday evening in Wexford was also being quizzed about the use of documentation owned by Redouane, one of three men who killed seven and injured 48 people in a knife attack in London on Saturday night.

Garda sources said both suspects were questioned under the Theft and Fraud Offences Act 2001. And they had been detained under section 4 of Criminal Justice Act 1994.

However, while neither arrest was described as immediately terror-related, the arrest in Wexford is regarded as more significant.

And sources said that was why the Special Detective Unit was involved.

The man detained in Limerick late on Monday had been released by the time news of his arrest broke yesterday.

Gardaí do not believe he has been radicalised or is an extremist. He appears to have been using the PPS card of Redouane so he could live and work in Ireland. It is believed he worked as a waiter and had been living and working in Limerick for a prolonged period.

Like Redouane, the men detained in Wexford and Limerick are both of Moroccan origin and gardaí now believe the key to unlocking Redouane’s movements in Dublin will be found in that community.

Any swapping or exchanging of Irish immigration or labour documents within that community in Ireland is now being probed very closely after Monday’s arrest.

Gardaí believe the men arrested knew Redouane and are hopeful the information that has emerged from their detentions will bring them deeper into the Moroccan community here.

However, Redouane also claimed to be Libyan at times and used the name Rachid Elkhdar.

Further arrests of people of interest who knew the London killer are expected.

A number of items, including the documents owned by Redouane, or generated using his identity, have been seized for examination. They were found during the searches in Wexford and Limerick.

The Garda is sharing all information collected with the security services in the UK, including the London Metropolitan Police investigating Saturday night’s attack in the city.

Redouane was one of three men who crashed a van into a shop front near London Bridge on Saturday night and then took to the streets on foot, stabbing people as he went.

The three armed men, one of them wearing military-style combat fatigues and an Arsenal football shirt, murdered seven people and injured 48.

They were wearing what looked like suicide explosives vests, later found to be hoax devices, and were shot dead within eight minutes of the first 999 call to the London Met. A shoot-to-kill approach was adopted when news of the suicide vests, believed to be genuine at the time, was relayed to the police.

Taoiseach Enda Kenny said Ireland’s intelligence services are “as good as any others” and that gardaí were in constant contact with counterparts in Britain and Europe over the recent attacks.

He said Ireland’s risk level remains at “moderate”, meaning the threat of an event is “possible but not probable”, as he noted that terrorist events such as the recent attacks in London are difficult to prevent.

“Insofar as resources are concerned and capacity to deal with incidents or multiple incidences, we are assured that there is no change in the status in Ireland from moderate, and that means that an issue is possible but not probable, and that can only be based on intelligence levels and ours is as good as any others,” he said.

In a statement on Tuesday, Minister for Justice Frances Fitzgerald said gardaí would release information about the attacker when it could. It was unable to do so for now as there was a live investigation under way, she said.