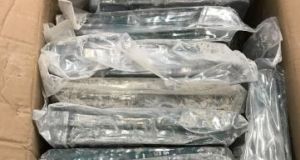 Suspected cocaine found in a lorry in the Holyhead port in Wales which the PSNI believe was destined for Northern Ireland. Photograph: PSNI

Seven people have been charged after £8 million worth of drugs were seized in various operations since the beginning of the month by the Police Service of Northern Ireland (PSNI) in conjunction with the National Crime Agency and Border Force.

The seizures consisted of Class A cocaine, cannabis and prescription drugs and were removed during five separate operations since October 1st, the PSNI said on Monday.

Detective Chief Superintendent John McVea, Head of the PSNI’s Criminal Investigations Branch, said £6 million worth of suspected Class A cocaine was found in a lorry in the Holyhead port in Wales concealed with refrigerated goods, which they believe was destined for Northern Ireland.

“This seizure is one of the largest in recent times and would have caused significant harm to people living in our communities,” Mr McVea said.

A 51 year old man was charged by the NCA with exporting Class A drugs and appeared in court in Wales on Monday.

Three men were charged with a number of drug-related offences and possessing criminal property and have appeared in court.

“I believe it was linked to an organised crime gang, which operates on an international scale,” Mr McVea said.

In addition, approximately £1 million of suspected cannabis, which had been strapped on to the roof of a large horse box-type vehicle, was recovered after the lorry shed its load on the M1 motorway on Saturday.

A man was charged and has appeared in court charged with possession of Class B drugs and intent to supply.

Detectives from the Paramilitary Crime Task Force have also charged two men with drugs-related offences following the seizure of £90,000 worth of suspected cannabis in December 2019.

Mr McVea added: “Drugs cause nothing but misery and pain within our communities and this is why removing these dangerous substances from our streets is a key priority for the Police Service of Northern Ireland and our partner agencies.

“We have had significant successes in October already and we will continue in our relentless pursuit of removing not only these dangerous drugs from society but also those involved in the supply.

“People who bring drugs into our communities do not care about the pain and misery they cause, instead they only care about the significant profits they can make.”