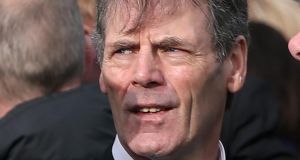 The non-jury court heard that audio surveillance of a conversation between a woman and one of the suspects involved in a plot to murder Patrick “Patsy” Hutch (above) picked up references to “they have so much money, they could buy half the Hutch lads” and “they’re getting €20,000 and all for setting somebody up, used to get that for doing the hit”. Photograph: Collins Dublin

Large sums of money were made available to murder people and those involved in the Kinahan cartel were paid €20,000 for “setting people up for a hit”, the Special Criminal Court was told on Friday.

The non-jury court also heard that audio surveillance of a conversation between a woman and one of the suspects involved in a plot to murder Patrick “Patsy” Hutch picked up references to “they have so much money, they could buy half the Hutch lads” and “they’re getting €20,000 and all for setting somebody up, used to get that for doing the hit”.

During Friday’s sentence hearing for Michael Burns, Ciaran O’Driscoll and Stephen Curtis, evidence was given that gardaí recovered a written record of the financial expenditure of the Kinahan gang sub-cell from a suspect’s address.

This breakdown of the expenses and payments of the operation to murder Mr Hutch – the older brother of the leader of the rival Hutch organised crime group – detailed a “starting balance” of €7,000 and recorded how “logistical costs” came to in excess of €10,000.

In a related sentence hearing on Thursday, Mr Justice Tony Hunt said the court accepted garda evidence that the Kinahan organised crime gang is involved in “execution-type murders” to protect its core activities, which include organised drugs and firearms offences on “an international scale”.

The court further accepted that the crime gang operated “an organised hierarchical structure” with “cells and sub-cells” to “segregate activities and limit knowledge” among gang members. The gang also operated on directions from superiors within this hierarchy.

Michael Burns (43), of no fixed abode, Ciaran O’Driscoll (25) of Avondale House, Cumberland Street, Dublin 1 and Stephen Curtis (32) of Bellman’s Walk, Seville Place, Dublin 1 have admitted to having knowledge of the existence of a criminal organisation and participating in activities intended to facilitate the commission of a serious offence by that criminal organisation, or any of its members, namely the murder of Mr Hutch within the State between February 1st and March 10th, 2018, inclusive.

O’Driscoll has pleaded guilty to agreeing to act as a look-out and to helping plan the intended shooting. Curtis has admitted providing, or assisting in providing, one or more mobile phones for use by the criminal organisation and purchasing or assisting in the purchase of one or more mobile phones, sim cards and credit top-ups. The activities also include passing on the phone number of the “looker” (or look-out) – O’Driscoll – to a member of the criminal organisation and planning or assisting in planning the intended shooting of Mr Hutch.

At Friday’s sentence hearing, Det Supt David Gallagher from the Garda National Drugs and Organised Crime Bureau, summarised the facts of the case.

Det Supt Gallagher told prosecuting counsel Sean Gillane SC that the investigation occurred between February 1st and March 21st, 2018 and the surveillance operation initially focused on a Mercedes car, which was connected to Burns. The investigation involved included manual surveillance, audio surveillance, the harvesting of CCTV footage and phones.

The target of the Kinahan organised crime group was Mr Hutch and there were 10 people involved in the plot to murder him, he said. The court heard Mr Hutch travelled on a motorcycle and it was covered with tarpaulin in his front garden on Champions Avenue.

Det Insp Gallagher explained that the investigation focused on “disrupting and dismantling” the capabilities of the criminal organisation. The gang operated inside and outside the jurisdiction and was it was hierarchical in nature. The purpose of the sub-cell, which was formed in the north inner city, was to carry out the murder of Mr Hutch, he pointed out.

There were three essential stages in the plan to murder Mr Hutch. The first was to set up a “staging post” at Belmont apartments which was midway between two locations associated with the target Patrick Hutch. The second was a “ruse” to commit criminal damage “to lure” Mr Hutch from his home to the murder scene while a “looker” would give the “hit team” the signal when he was on his way. The third element was to have a “getaway location” at Stoney Road in East Wall in Dublin 3 where the gunmen would go through a pedestrian tunnel and a car would be waiting on the other side to take them away.

Det Insp Gallagher explained that O’Driscoll’s role was to act as a “look-out” for Mr Hutch, Curtis had sourced the mobile phones and credit which were ultimately to be used by the “hit-team” and Burns’s role was to supervise others in relation to the planning and overall surveillance.

The court heard Burns and another suspect had done reconnaissance trips around Dublin 1 including to Mr Hutch’s address. Evidence was also given of audio recordings between Burns and other individuals involved in the plot discussing Mr Hutch’s movements, his motorcycle and how he might be drawn from his house.

Burns said in one of the recordings: “It’s a white yoke, you see him coming out of the bottom of the junction. I’d personally wait until he gets to the gate.” He was also recorded as saying to another associate: “Just floor it straight behind him and do what you have to do and by the time he turns it will be game over”.

Audio surveillance also captured a discussion between a woman and an individual referred to as suspect Number 1 discussing money. Suspect Number 1 tells the woman: “They have so much money, they could buy half the Hutch lads” and “they’re getting €20,000 and all for setting somebody up, used to get that for doing the hit”. Det Insp Gallagher said this put in context some of the money available to the gang.

Burns was also heard saying in another conversation: “I have the two big instruments for you”, in a reference to firearms.

Referring to Curtis, Det Insp Gallagher said he had purchased nine mobile phones, sim cards and phone credit. He was also captured on audio-surveillance saying that suspect Number 1 was “getting it wrong” as the coffee shop they met at was “packed with coppers” and he wanted out of the gang.

The detective said that after the hit was foiled, several mobile phones were seized from the gang members’ addresses. The “L” phone was attributed to O’Driscoll and stood for “looker”, he said.

Under cross-examination, Det Insp Gallagher agreed with defence counsel Michael Bowman SC, for Burns, that his client did not operate at the highest role in the sub-cell and he had taken his directions from suspect Number 1. The detective agreed that Burns was not even in charge of money and suspect Number 1 was apportioning expenses as required.

The witness agreed with Bernard Condon SC, for O’Driscoll, that he had difficulty with drugs from a very young age and was at the lowest level of the organisation.

In mitigation, Mr Bowman said that Burns was approaching the middle years of his life, had significant psychological difficulties from his childhood and had a breakdown in 2011.

Mr Condon, for O’Driscoll, submitted to the court that his association with the gang was limited to “happenstance” and he would not have been picked to be part of the gang other than the fact his grandmother lived on the same road as Mr Hutch.

In his submissions, Seamus Clarke SC, for Curtis, said that a value of €500 was put on his client. Mr Clarke asked the judges to be as lenient as possible when sentencing his client and to consider in mitigation his early guilty plea.

Mr Justice Tony Hunt, presiding, with Judge Sarah Berkeley and Judge Dermot Dempsey, remanded the three men in custody until June 29th, when they will be sentenced.