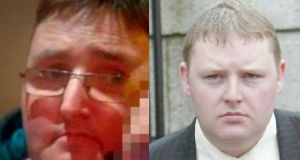 Stephen Dunne (left) and Gary Gleeson ) discussed how they needed to aim for ’head shots’ or they would not get paid.

Two “foot soldiers” for an organised crime gang whose “shambolic” plan to murder a Dublin man was foiled by gardaí have received sentences totalling 24 years.

The two Dublin men pleaded guilty at the three-judge Special Criminal Court last month after armed detectives intercepted their van during an operation targeting organised crime in Dublin in August 2017. The court heard there was a loaded firearm inside the vehicle “ready for use”.

Gary Gleeson (34) and Stephen Dunne (39) discussed how they needed to aim for “head shots” or they would not get paid, the court previously heard.

Gleeson was jailed for 12 years with one year suspended while his co-accused Dunne was sentenced to 12 years in prison, with two years suspended.

Sentencing the men on Monday, Mr Justice Tony Hunt, presiding at the non-jury court, described the plan to kill Michael Frazer as “shambolic, confused and ill-prepared”.

The judge said that a transcript of the conversation between the men before they were intercepted was a “disturbing document” which included a “graphic description” of what each man intended to do to Mr Frazer.

He described the defendants plan as “a dangerous and outrageous escapade”. The men’s drug-taking, he said, was clearly audible on the secret recordings of the pair.

Gleeson, with an address at Muskerry Road in Ballyfermot, Dublin 10 and Dunne, of Meile an Ri Drive in Lucan, Dublin 20 pleaded guilty in May to possession of a 9mm Luger semi-automatic pistol and 10 rounds of 9mm calibre Sellier and Bellot ammunition with intent to endanger life. The offences were carried out at Naas Road, Crumlin on August 7th, 2017.

The two men had previously been charged with conspiracy to murder Dubliner Mr Frazer (39) between July 28th and August 7th last.

Sentencing the two defendants, Mr Justice Hunt said these were very serious offences which had involved lengthy preparations over a number of weeks. The two men had agreed to carry out the killing and there had been a reference to expecting payment in the transcript.

The men had been recruited to this enterprise as they had become “enmeshed” in drugs, Mr Justice Hunt said, but neither could be described as organisers in this “deadly enterprise”.

The judge said Gleeson’s mitigation was affected by his violent offending at circuit court level whereas Dunne had a less serious criminal record.

Mr Justice Hunt said activity of this type attracts higher sentences if there are no mitigating factors.

The judge said that if the defendants had contested the trial they could have received sentences of 16 years. “Mitigation and guilty pleas saved them considerable time in custody,” the judge added.

The men’s sentences were backdated to August 7th, 2017 when they went into custody. Mr Justice Hunt also commended the gardaí for their “excellent work”.

Defence counsel Michael O’Higgins SC, for Gleeson, told the court at a sentence hearing on July 13th that on the bare facts of the case it could be said his client was caught “red-handed” but this would have been time consuming to prove in a trial. In mitigation, he emphasised to the court that Gleeson was a “foot soldier” and not the brains of the operation.

The barrister said Gleeson had a very strong family and a letter from his partner was read to the court in which she called him a “loyal and supportive father”.

The court heard that Gleeson had a very adverse reaction to his mother’s death and began to drink and take cocaine. His partner said that she in no way condones what Gleeson has done but attributed it to his addictions and the death of his mother.

Mr O’Higgins said there had been a lost shipment of drugs worth €80,000 and Gleeson consequently had a “bad time” with those people who wanted their money back. His family became involved in the cross-fire.

A psychological report from a consultant clinical psychologist was also handed into the court in which it was noted that Gleeson had full “suicidal ideation” in the lead up to this event. Counsel said Gleeson was very remorseful and had written a letter of apology to Mr Frazer.

Michael Bowman SC, for Dunne, said at the sentence hearing on July 13th that it was manifestly clear his client had struggled with heroin addiction for in excess of 20 years. There have been serious attempts at self-harm and he was an inpatient in psychiatric wards on five or six occasions, he said.

Mr Bowman said Dunne was very cognisant of the intervention by gardaí in this event and he had expressed relief about it. The court heard that Dunne’s mother said her son was very insecure emotionally and she believed he had been brain-damaged arising from the quantity of drugs he had taken. He struggled, she said, to understand how gullible and naive an individual he is.

Mr Bowman said while there was one round in the breach, the magazine had been loaded backwards by his client into the firearm so it was incapable of firing. “When the court comes to apportioning responsibility, one must consider the fact that Mr Dunne has very serious incapacities,” he said.

Dunne was vulnerable and that vulnerability has been exploited to the maximum, Mr Bowman said.

Det Insp Gallagher told prosecuting counsel Garnet Orange SC that gardaí received confidential information that a criminal gang in Dublin were involved in the active targeting of an unknown individual at the time who was based in the Drimnagh area of Dublin. “The plan was to attack this unknown person with murderous intent,” said Det Insp Gallagher.

He said an investigation was put in place and surveillance was conducted for a distinctive van with particular wording on it.

The van, a Fiat Doblo, was identified in the Lissadell Avenue area of west Dublin in late July, 2017 and the two defendants were seen in it. The van was kept under observation and various notes were made of its movements in late July and August, said Mr Orange.

The witness said the van, which “looked legitimate”, was branded with fictitious markings, including phone numbers and an email address. It was registered to a man at a fictitious address in north Dublin.

Det Insp Gallagher said that as the investigation was progressing, officers became aware that the person targeted was Michael Frazer who is from the Drimnagh area of Dublin.

A decision was made to search his van looking for possible tracking devices on Mr Frazer’s van, and a device was found underneath it.

A warrant was then got to place an audio surveillance device on the Fiat Doblo van which led to information being gathered. Through the use of this discreet listening device, gardaí­ became aware that something of significance was intended for the evening of August 7th.

On that evening, the van was followed as it went from Ballyfermot to the Naas road. At 7.45pm members of the Special Detective Unit intercepted the van on the Naas road.

Insp Gallagher said officers found Gleeson and Dunne in the van with a gun sitting between them. The gun was loaded and ready to fire. There was one round in the breach and there were nine further rounds in the magazine.

A can of petrol, lighter and rubber gloves as well as a small amount of cocaine were found after gardaí searched the vehicle.

Gleeson and Dunne were arrested and detained in Crumlin Garda station, nothing of evidential value emerged during their interviews. During their detention, DNA was taken from both men to use for forensic analysis in the course of the investigation.

The court heard detectives later found a tracking device under Mr Frazer’s van and Dunne’s DNA was found on a SIM card which had been inserted into this tracker. This tracker was linked to a mobile phone and Dunne was caught on CCTV cameras buying €20 credit for that phone. There was also further DNA evidence linking Dunne to the handle and the trigger of the firearm.

The court heard a conversation between the two men was recorded from when they entered the van on the evening of August 7th at 7.19pm.

Det Insp Gallagher told the court it was clear from the transcript that the intent of the two men was to target and murder Mr Frazer.

He then read the transcript of the conversation to the court in which Gleeson says: “Aim for the head yeah? have to get him in the head. Head shots or we won’t get fucking paid.”

To which Dunne replies: “Once I get him a bit, I’ve to walk right up to him you know what I mean, do you get me? I just keep walking closer yeah, as soon we block him I’m going to let a shot off in the van yeah, and then once I get him a bit I’ll keep walking towards him yeah, right up to the windscreen and I’ll just keep shooting yeah, and around to the side and I keep shooting yeah?”

Gleeson then says: “Riddle him.”

Det Insp Gallagher agreed with Mr Orange that the two men can also be heard in the recording discussing the preparation of the gun by cocking it and preparing for the destruction of the van.

Dep Insp Gallagher confirmed the two men’s target was Mr Frazer and he did not want any involvement with gardaí­ with regards to this investigation. He said Mr Frazer had a threat to his life and was under the Garda threat management system. Mr Frazer was targeted by senior figures in the organised crime group for internal matters and the two men were contracted and paid to carry out the attack, the court heard.

Defence counsel Michael O’Higgins SC for Gleeson said his client was a hired hand and foot soldier and not a senior figure in the organisation.

While Michael Bowman SC, for Dunne, said he was not the mastermind but the “essential cog” and was not someone operating at the upper echelons of criminal behaviour.

Mr Bowman asked the court to structure a sentence to rehabilitate Dunne into the community with something to offer rather than a capacity to cause havoc.