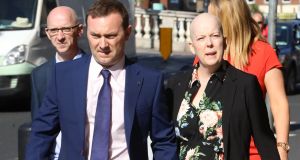 The Supreme Court has been asked to urgently hear an appeal against a key High Court judgment in the case of terminally-ill Ruth Morrissey.

The HSE and two laboratories told the court on Wednesday the judgment has far-reaching consequences for the Cervical Check tribunal, other litigation about cervical cancer, cancer screening services and medical diagnosis generally.

The judgment was given by Mr Justice Kevin Cross in the case of Ms Morrissey, who is terminally ill with cervical cancer, and her husband Paul, from Limerick.

The concerns of the HSE, Quest Diagnostics Ireland Ltd and Medlab Pathology Ltd, centre on the High Court finding that screeners should have “absolute confidence” about the adequacy of a slide sample and that a test result has no abnormalities before passing it as clear.

They say that introduces a standard in the relevant legal test for negligence that is incompatible with cervical cancer screening.

Pat Hanratty SC, for the HSE, said the judgment caused “widespread confusion” and their concerns include the “absolute confidence” test introduced “an unnecessary embellishment which could affect other areas of medicine”.

Michael Cush SC, for Quest, said the trial judge failed to appreciate evidence which meant the absolute confidence standard is “unworkable and inappropriate” and is not actually applied in screening programmes.

That evidence included an “undeniably excellent” English screening programme had a false negative rate of between 44 and 55 per cent.

The Morrisseys dispute the judgment has the consequences contended for but their counsel said it would be an “enormous relief” to them if the litigation was over and they would agree to a Supreme Court appeal confined to the issue of standard of care.

Pat Tracey SC, for the Morrisseys, said there was “widespread misunderstanding” or Mr Justice Cross’ judgment which, he said, had not imposed a standard of “absolute certainty” but rather one of “absolute confidence”.

Any such appeal will be heard in early November.

An appeal is normally brought to the Court of Appeal but the Supreme Court can permit that route to be by-passed and hear an appeal itself, bringing finality to litigation.

The couple were awarded €2.1 million damages and the Supreme Court was told on Wednesday that the Government this week confirmed to the Morrisseys, irrespective of the outcome of the appeal, that they will retain the damages.

Mr Hanratty said that was effectively being done by an “ex gratia” payment.

The court heard the HSE and Quest are not appealing the sum of damages but Medlab is.

Eoin McCullough SC, for Medlab, said some of the damages are dependency damages recoverable only in claims for wrongful death under the Civil Liability Act and a decision on that issue is of significance for other cases and for the Cervical Check tribunal.

His client’s focus in the appeal is the absolute confidence issue and the finding concerning inadequacy of the 2012 slide assessed by Medlab, he said.

Mr Hanratty, for the HSE, said it and the State Claims Agency, as manager of all cervical cancer litigation, believed the “absolute confidence” standard has potentially serious implications in a much wider context, including in relation to diagnosis. If that standard applied to diagnosis, “you can imagine the consequences”.

Mr Cush, for Quest, accepted the Supreme Court has a concern about the breadth of the appeal and said, were it not for the urgency of the matter, this appeal would normally first be decided by the Court of Appeal.

The matter was urgent because of the implications of the “absolute confidence” finding and the causation issues which had implications extending beyond this case, he said.

Mr Tracey, for the Morrisseys, said complex evidence militates against a Supreme Court appeal and any such appeal should be confined to the standard of care issue or else the entire appeal should be heard by the Court of Appeal.

The core issue before the cervical check tribunal is standard of care, he said.

He also disputed the judgment had any implications for medical diagnosis.