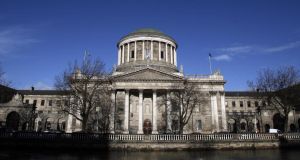 A local residents’ group has asked the Supreme Court to declare that planning decisions relating to a wind farm development on a mountain site at Derrybrien, Co Galway, did not permit the deforestation of more than 115,000 trees. Photograph: Chris Maddaloni/Collins

A local residents’ group has asked the Supreme Court to declare that planning decisions relating to a wind farm development on a mountain site at Derrybrien, Co Galway, did not permit the deforestation of more than 115,000 trees.

The site was the scene of a massive bog slide in October 2003 when nearly half a million tonnes of peat and debris was displaced, causing considerable damage to the surrounding area and pollution to a nearby fishing river.

In a 2008 High Court judgment, Mr Justice Declan Budd found it was not weather conditions but rather construction work done at the behest of Gort WindFarms Ltd that caused the bog slide.

The judge ruled environmental impact statements attached to various permissions for the 71 turbine windfarm envisaged the removal of the forestry and it was not unauthorised.

An appeal against Ms Justice Dunne’s ruling was heard before a five judge Supreme Court today, which reserved judgment.

In written submissions for the residents, it was argued the type of catastrophe “triggered by development” that was the October 2003 bogslide was “precisely what the system of environmental impact assessment is designed to prevent”.

Their counsel John T. Gibbons SC, with Seamus Ó Tuatháil SC, argued a 2006 European Court of Justice decision meant the grant of planning permission did not follow the procedures laid down by the EC environmental impact assessment directive.

Both before and after the 1997 amendment of that directive, the directive envisaged an EIA for deforesttation on the scale envisaged, it was submitted.

A breach of the directive “cannot simply be ignored” and EU member states must have some mechanism to re-open past planning decisions granted in breach of the directive, it was submitted. The relevant time limits to challenge the deforestation did not apply but, even if they did, the court could and should extend them, it was also argued.

Section 160 of the Planning and Development Act 2000 can be invoked to challenge a development “unauthorised” in the sense the planning decision was not preceded by a proper EIA, it was further submitted.

Robert Barron SC, for the respondents, said the windfarm became fully operational in January 2006 and had brought “only good”, including employment, to the area. His clients had made a substantial investment in the project and had acted in good faith.

In written submissions, the respondents argued the residents appeal was misconceived in that it was an attempt to litigate issues that cannot arise in an application under Section 160 of the 2000 Act.

The High Court was correct in finding the environmental impact statements attached to the various permission made quite clear the proposed development envisaged the removal of forestry and the change of use on the lands from forestry to a wind farm, it was submitted. .

EU law respects the principle of legal certainty and national administrative decisions that have become final will remain valid irrespective of any later finding of inconsistency in the decision making process with EU law, it was also submitted.

The planning permissions under which the windfarm was developed remain “valid” and “extant”.