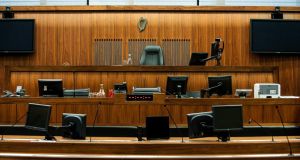 President of the Court of Appeal Mr Justice Seán Ryan, who sat with Mr Justice Gerard Hogan and Mr Justice Alan Mahon, said the court would reserve judgment to a date “as soon as possible”. File photograph: Collins Courts

A British citizen who was found on board a boat holding more than €400 million worth of cocaine off the Irish coast has moved to appeal his conviction.

Christopher Wiggins (48), with an address at Estepona, Malaga, Spain, pleaded guilty at Cork Circuit Criminal Court to possession of cocaine for sale or supply on November 5th, 2008, after the boat Dances With Waves was boarded 250km off the Irish coast.

Three British citizens including Wiggins were on board the boat when 1.9 tonnes of cocaine worth more than €400 million was found by Irish authorities. All three men pleaded guilty to possession for sale or supply.

Wiggins was sentenced to 10 years’ imprisonment by Mr Justice Carroll Moran on May 8th, 2009.

Representing himself, Wiggins moved to appeal his conviction on Monday on grounds that a section 15A sale or supply drugs offence could not have been levied against him on the facts.

He said there was no importation involved in the offence - it was committed outside of the State, so section 15a of the Misuse of Drugs Act should not have applied because it only has a territorial application.

Furthermore, Wiggins submitted the boarding of Dances With Waves by the authorities was unlawful.

Dances With Waves was flying the British Red Ensign “because there were three British nationals on board”, but the boat was not registered, Wiggins said.

The court heard claims from Wiggins that Dances With Waves was boarded at 21:54, but the boat’s registration was not checked by the authorities until 23:20, an hour and a half after the boarding.

An Irish ship simply cannot board a vessel flying the flag of another State without doing a registration check, he said.

Dances With Waves was not registered anywhere, but the Navy should have confirmed its status before boarding the boat. Until a registration check is carried out, you cannot check whether the boarding would be valid or not, he said.

Counsel for the Director of Public Prosecutions, Thomas Creed SC, told the court that in a case where a ship was unregistered, there was a power to visit the vessel.

Law of the sea

It was not an unlawful or illegal boarding, Mr Creed said, it was just a boarding.

Mr Creed said there was no basis for Wiggins’s argument regarding section 15a of the Misuse of Drugs Act.

President of the Court of Appeal Mr Justice Seán Ryan, who sat with Mr Justice Gerard Hogan and Mr Justice Alan Mahon, said the court would reserve judgment to a date “as soon as possible”.

One of Wiggins’s co-accused, Philip Doo (58), from Devon in England, withdrew his appeal before proceedings commenced.