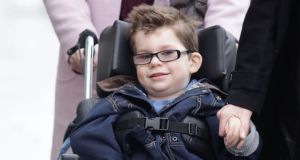 A High Court judge, when approving a further €580,000 payment for a young boy with cerebral palsy, has expressed concern over distress caused by continuing delays in enacting laws allowing for phased payments to meet the lifelong care needs of people who successfully sue over catastrophic injuries.

In anticipation of the legislation, Luke Miggin’s case was settled and adjourned three years ago on terms including an interim payment of €1.3 million. Further payments were later ruled, bringing the sum above €2 million and the child’s mother, Emily Miggin, returned to court again yesterday because the judge had to formally rule another payment to meet further future care costs.

Approving that payment, Ms Justice Mary Irvine said successive ministers for justice had promised the periodic payments legislation but it remained not possible to say when the legislation would be published.

Addressing Ms Miggin, the judge noted this was the third or fourth time the case had come before the court and said she knew the distress litigation causes families with children such as Luke. “They can’t get on with their lives because of ongoing litigation.”

Ms Miggin, a therapist, had given up her work and is her eight-year-old son’s full-time carer, said she applauded the judge on what she had said about the lack of periodic payments legislation but she was satisfied with the latest settlement.

The child’s case arose from the circumstances of his birth at Mullingar General Hospital in February 2006. He has cerebral palsy, is in a wheelchair and requires 24-hour care.

Through his mother, Emily Miggin (46), Ballinadrimna, Athboy, Co Meath, Luke sued the HSE and consultant obstetrician Michael Gannon of Mullingar hospital alleging negligence in the circumstances of his birth. Liability was admitted by both defendants.