Varadkar to consider ‘carbon cheque’ to compensate for tax

Money raised from carbon tax to be ‘given back to households’, says Taoiseach 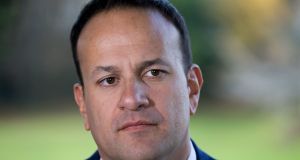 Households may be given a “carbon cheque” to compensate for an increase in carbon tax under proposals being considered by the Government, according to Taoiseach Leo Varadkar.

He said although any changes to carbon tax would likely not apply until 2020, he would be seeking cross-party support for a set of new proposals in relation to the tax in the coming weeks.

Mr Varadkar said two models were under consideration to ensure that money raised from the tax was “given back to households”.

One option being considered is to give a carbon cheque to households or individuals and the other is to increase welfare payments or increase tax credits through the revenue raised.

“The decision we make on carbon tax would not apply until 2020 unless you are doing it on the night of the budget but that would be a decision we would make nearer the time.”

Mr Varadkar said he had a “good meeting” on the tax with the Minister for Finance Paschal Donohoe and the Minister for Climate Action Richard Bruton in late December where the proposals were discussed.

“You can either give everyone a carbon cheque in the post, you can do that by individual or by household, and you get that upfront. That’s designed to compensate you for the cost of the carbon.”

He said that those with low-carbon lifestyles would fare better under this plan.

“Those who use a lot of carbon don’t benefit as much, those who have low-carbon lifestyles benefit more.”

This could mean, for example, that a household that uses a high-carbon fuel such as coal, though receiving a “carbon cheque”, will not feel the benefit of it because they will have paid higher carbon tax than, for example, a household using solar panels.

Mr Varadkar said another option would be to increase welfare payments such as the child benefit payment.

“ We haven’t decided which to go for. I would like to get an all-party consensus around it so what I propose to do is develop a proposal in the first two months of the new year and put that out to the other parties to see if they are willing to be supportive of it.”

The Taoiseach signalled it was unlikely that the increase would come into effect on budget night because of potential fuel costs for households during winter time, but could be timed to come in later in the year.

The current rate of €20 per tonne was not increased in the last budget as had been widely anticipated.

Recent ESRI projections found that carbon tax would have to increase substantially – from €100 per person a year to €1,500 a year – if Ireland is to meet legally binding targets on reducing greenhouse gas emissions by 2030.