Ruling due on second request for Ian Bailey extradition to France 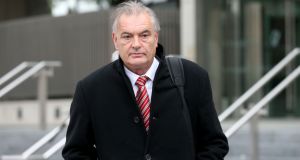 Ian Bailey (60) of The Prairie, Liscaha, Schull, west Cork, is wanted by the French authorities for the alleged voluntary homicide of Sophie Toscan du Plantier in 1996. Photograph: Collins Courts

The High Court is expected to deliver judgment next month on a second request for Ian Bailey’s extradition to France in relation to the death of Sophie Tuscan du Plantier.

Mr Bailey (60), of The Prairie, Liscaha, Schull, west Cork, denies any involvement in the death of Ms du Plantier, who was found dead outside her holiday home in Schull in December 1996.

In the High Court today, Mr Justice Tony Hunt said he would give judgment on July 24th next on the principal issues discussed at hearings in May.

Mr Justice Hunt said he would make clear to the parties what arguments he regarded as “left over” which may have to be the subject of further hearing. These include legal matters relating to the issuing judicial authority, among others. Lawyers for the State had sought an adjournment.

Mr Simons said there was “no way around” the Supreme Court decision in 2012 which identified an “absolute jurisdictional bar” to Mr Bailey’s extradition to France in relation to the alleged offence.

He said section 44 of the European Arrest Warrant Act 2003, which implemented the European Framework Decision on extradition between member states, was determined by the Supreme Court as an “absolute bar” to Mr Bailey’s surrender, and that continued to apply.

A five-judge panel of the Supreme Court refused to surrender Mr Bailey in 2012 and four of the five judges upheld Mr Bailey’s argument that section 44 prohibits surrender because the alleged offence was committed outside French territory and Irish law does not allow prosecution for the same offence when committed outside its territory by a non-Irish citizen.

Applying for the surrender of Mr Bailey, counsel for the justice minister, Robert Barron SC, said the State was asking the High Court to refer the Supreme Court’s 4-1 interpretation of Section 44 to the European Courts of Justice for determination.

Mr Barron said O’Donnell J, the single dissenting Supreme Court judge on the Section 44 matter, was correct in his interpretation of the framework decision and the Act, and that the majority Supreme Court interpretation was “incorrect” and that it would be appropriate to have a reference from the High Court to the European Courts on the matter.

He said it was “recognised by the Supreme Court” that there were two interpretations, and the only way it could be resolved conclusively was by the court in Luxembourg.

Mr Justice Tony Hunt remarked that “somebody, somewhere” had apparently decided that the Supreme Court got it “catastrophically wrong”, and the way to correct it is to get the European Courts to tell the Supreme Court they got it wrong.

It appeared as though the application was an “exploration of a method by which the Supreme Court decision might be revisited”, Mr Justice Hunt remarked.

Mr Barron agreed his submission was that the High Court should refer the matter to Europe because the Supreme Court got it wrong. However, “with respect”, Mr Barron said, nobody was trying to “usurp” the courts and there was “no ulterior purpose”. He stressed he was simply making legal submissions.

Mr Barron agreed the High Court did not need to go further than O’Donnell J’s dissenting view, but denied he was asking the High Court to decide the Supreme Court majority got it wrong.

Mr Justice Hunt asked Mr Barron what the French authorities had been doing between the Supreme Court’s judgment in 2012 and the decision to issue a new warrant in respect of Mr Bailey in 2016.

“When did Mr Bailey become a triable person rather than a chargeable person?” the judge asked.

Mr Barron said today that a request had been made of French authorities for more information, but that a reply was not yet forthcoming.