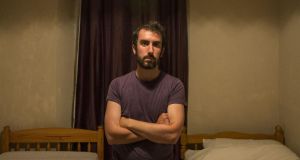 At the High Court on Tuesday, Dublin City Council sought injunctions against two members of the Irish Housing Network, Seamus Farrell (pictured above in the Bolt Hostel) and Aisling Hedderman, whom it claims are trespassing on the property. Photograph: Dara Mac Dónaill/The Irish Times.

The council claims two terraced three storey buildings at 38 and 39 Bolton Street in central Dublin, which it owns, were broken into some weeks ago and occupied by person calling themselves the Irish Housing Network (IHN).

It alleges they have named it the Bolt Hostel. The hostel, where renovation works are alleged to have been carried out, has been offered as accommodation for homeless people.

At the High Court on Tuesday, the Council, represented by David Holland and Karen Denning BL, sought injunctions against two members of the network, Seamus Farrell and Aisling Hedderman, whom it claims are trespassers.

Mr Farrell and Ms Hedderman were in court but were not legally represented. They said they are part of a group of volunteers who carried out works on the premises to provide accommodation for people who have nowhere to go.

Mr Farrell, who had asked the case be adjourned to allow him obtain legal advice, said the Council was “failing in its obligations” to homeless people, and what was being done at Bolton Street was “filling in the gap” by putting the building to use.

Some of the people coming to the network who had nowhere to go included a mother with three children, a mental patient released with no supports, a pregnant woman, and a couple living in a tent for 18 months.

Mr Farrell and Ms Hedderman told the court they were willing to allow an inspection and would not carry out any other works at the premises. They said they would not identify the persons at the premises in order to protect their confidentiality.

Mr Holland said it was with some reluctance the council had launched proceedings but it has concerns about the buildings. Its agents, most notably fire safety inspectors, have not been able to gain access to 38 and 39 Bolton Street, he said.

While the Council was “not unsympathetic” and shared the network’s objectives in relation to homelessness, it “could not condone the defendants methods”, counsel said.  The defendants might have some moral points but the council argued they had no legal entitlement to be in occupation, counsel said.

Mr Holland said the building was used for accommodation for the homeless, but was shut down and boarded up with steel shutters in 2012 as the buildings were no longer deemed fit for purpose.

He told the court the irony of the situation was the council has engaged with an approved housing body called Novas Initiative to renovate the buildings and to again use them as accommodation for the homeless.

That application was before the council’s planning department, counsel said.

Talks to resolve the matter had failed to bring about a resolution, he added.

The matter came before Mr Justice Paul Gilligan, who granted orders against Mr Farrell, Ms Hedderman and any other person with knowledge of the orders from carrying out any further works on the buildings. The judge also made an order allowing the council to inspect the buildings on Friday morning.

The judge refused to make orders preventing any further persons taking up residence in the buildings or compelling the defendants to identify to the Council those persons currently in the premises. He was refusing to make those orders as they would be difficult to enforce, the judge said.

The matter, along with the council’s application for an order requiring the premises be vacated was adjourned by the Judge to August, to allow the defendants obtain legal advice.