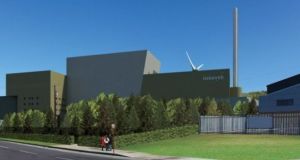 An artist’s impression of the proposed incinerator at Ringaskkiddy in Co Cork.

A legal challenge over the granting of planning permission for a €160 million incinerator at Ringaskiddy in Cork Harbour has opened at the High Court.

Mr Justice David Barniville heard that planning permission was granted last May but a planning inspector with An Bord Pleanála had recommended that it be refused.

Maurice Collins SC, for a group opposing the incinerator, said there has been “a continuum of planning activity and controversy” connected to the site at Cork Harbour.

Counsel said the inspector had recommended refusal of planning permission but An Bord Pleanala granted the permission by a five to two majority.

“We know very little of how it reached a decision in this case,” he said.

A large proportion of the local population is opposed to the incinerator and believe it would pose a significant health threat to the community, he said.

The board granted planning permission under the Planning and Development (Strategic Infrastructure) Act 2006 to Indaver Ireland for the incinerator at a 13.5 hectare site at the end of the Ringaskiddy Peninsula. The incinerator will have an operational life of 30 years.