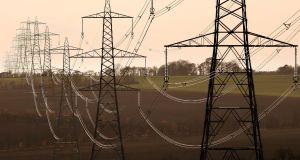 North-south electricity interconnector: An Bord Pleanála had given EirGrid permission to build almost 300 pylons in Cos Meath, Cavan and Monaghan. Photograph: Oli Scarff/Getty

An Bord Pleanála failed to take landowners’ rights, environmental issues or the potential impact of Brexit into account in approving the development of a north-south electricity interconnector, the Commercial Court has been told.

Members of North East Pylon Pressure Campaign, representing about 190 affected landowners, and Maura Sheehy, a farmer from Donaghpatrick, Co Meath, were in the packed court on Tuesday for the opening of their challenge to the board’s approval.

The case is being heard by Mr Justice Max Barrett, who will also hear two challenges from David Malone of Eurolaw Environmental Consultants and Val Martin, a Co Cavan farmer and environmental campaigner.

All three cases concern An Bord Pleanála’s decision in December 2016, after a 12-day oral hearing, to grant EirGrid permission to build almost 300 pylons in Cos Meath, Cavan and Monaghan.

The interconnector is planned to run from Batterstown, in Co Meath, to Turleenan, in Co Tyrone. Eirgrid had said the overall cost of construction will be €286 million, €180 million for the proposed development in the Republic and €106 million for the Northern Ireland element.

The landowners’ barrister, Conleth Bradley SC, said that discussion of the interconnector was between the planning authority and the developer and had excluded the landowners.

He said that, in contrast to the planning application for the Northern part of the development, the application in the Republic did not include a request for access to affected land south of the Border.

Although EirGrid says that access is provided for arising from the development’s environmental-impact assessment, the applicants claim that it has to be asked for in the planning application and that it raises the legal distinction between an environmental impact assessment and planning permission or approval.

Mr Bradley said that the landowners’ exclusion from the discussion of the conditions for the development breached their rights under the Constitution and the European Convention on Human Rights.

The board, it is also argued, breached the European Union directive on environmental-impact assessments. The board, it is claimed, failed to ensure appropriate public participation in the process or to consider or apply any appropriate mitigation measures in respect of the assessment process. Mr Bradley argued that the board and developer focused on costs, security and expense rather than the environment.

It is also alleged that the board’s decision contravenes the EU habitats directive and failed to consider the situation of the whooper swan; and that there was no lawful basis for the board to make decisions about a permit-granting procedure for “projects of common interest”, which are key EU-defined energy-infrastructure projects.

The board, it is alleged, was not lawfully designated as a competent authority to grant approval for the development under section 182B of the Planning and Development Act 2000.

Mr Bradley said minutes of meetings in 2016 and 2017 indicated concerns by the developers in this joint venture – EirGrid Group and its subsidiary Soni, which operates the electricity system in Northern Ireland – that the designation of a single electricity market on the island of Ireland will be revisited as a result of the United Kingdom’s departure from the EU. None of these concerns was assessed and considered by the board in its role as competent authority, counsel argued.

Election 2020: FF edges ahead of FG as SF surges in new Ipsos MRBI poll 22:00
FF spoke to Waterford candidate over issues around liquidated company 21:47
Man jailed for welfare fraud admits to further €18,000 false claim in benefit 21:15
Fine Gael says it will roll out free GP care to everyone under age of 18 by 2025 20:59
PSNI’s Deputy Chief Constable set to retire at end of month 20:50