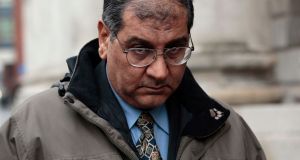 A man who suffered severe injuries when the car in which he was a back seat passenger left the road and crashed into a pole has settled his High Court action for €1.9 million.

Liam Reidy SC, for Mr Al Balooty, said his client came to Ireland from his native Iraq five years ago where he had held a position of prominence in charge of 2,000 people in the ministry for oil.

He said Mr Al Balooty was a back seat passenger in the car which lost control and collided with a pole. His client does not recall whether he was wearing a seatbelt or not, counsel said. Those in the car who were wearing seatbelts were uninjured, he added.

Mr Al Balooty sued the driver of the car, Monam Hassan, of Castletroy, Co Limerick, over the accident which happened on the M7 outside Portlaoise.

He claimed Mr Hassan was driving in a manner which was dangerous having regard to the nature of the highway and the condition of the vehicle. He also alleged failure to properly maintain the vehicle.

The claims were denied, and Mr Hassan’s side also pleaded contributory negligence against Mr Al Balooty in allegedly not wearing a seatbelt.

Mr Reidy said Mr Al Balooty was found in the well of the car, between the back and front seats. He suffered significant injuries and had a bleed on the brain stem. He also had a fracture to the right side of his skull and a number of fractures to the spine.

Mr Al Balooty was in a coma for a number of days but has made a remarkable recovery, counsel said. He can walk with crutches and now resides in a nursing home in Limerick.

While he previously could speak four languages, he has now lost linguistic skills, counsel said.

Mr Reidy said the only issue in relation to the accident was whether there was black ice on the road. A witness had said he was aware the road was slippery but the driver of the car said he was unaware.