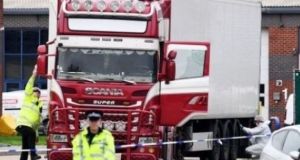 Essex police and forensic officers examine a lorry after the bodies of 39 Vietnamese nationals were discovered in its trailer in Essex. File photograph: Leon Neal/Getty Images

A High Court judge has said he will order the extradition of a Northern Irish man wanted in the UK to face multiple counts of manslaughter, following the discovery of 39 dead Vietnamese nationals in a lorry trailer in Essex.

The UK authorities want Eamon Harrison (23) from Mayobridge, Co Down, to face 39 counts of manslaughter, conspiracy to assist unlawful immigration and conspiracy to commit human trafficking under the UK’s Modern Slavery Act.

Mr Justice Donald Binchy on Friday said he received “very comprehensive” submissions from Mr Harrison’s legal team and that of the Department of Justice.

He said, after considering the submissions from both parties, he found there was nothing to preclude him from ordering the surrender of Mr Harrison and that the circumstances “meet” the requirements of the law.

The judge said he has made a lengthy and “detailed” written judgement explaining his decision.

He said: “The decision itself is ready but it’s not available for court this morning.”

Mr Justice Binchy then indicated the 50-page judgement would not be ready until Monday, January 27th.

He said he would not summarise his judgement for fear of omitting something.

Mr McGillicuddy said the court had indicated its decision but Mr Harrison’s legal team needed time to consider the decision and to decide whether to appeal it or not.

He said holding off on making the order on Friday would be of no disadvantage to the State or the court and said Mr Harrison is in custody. The barrister also said other considerations, such as Brexit, “don’t arise, certainly at the present time”.

Ronan Kennedy SC, for the Minister for Justice, said that the minister is anxious that, as the court has given its decision, that the matter be “finalised as soon as possible”.

Mr Justice Binchy subsequently deferred making the order until Tuesday, February 4th and adjourned the matter until that date at 10am. The judge also made a production order for Mr Harrison to appear on that date.

It is alleged that Mr Harrison transported the refrigerated trailer in which the bodies of eight women and 31 men were found in an industrial park in Grays, Essex on October 23rd last.

He is alleged to have delivered the trailer to a Belgian port before its onward journey to Britain, where it was collected from the Port of Purfleet, Essex by Maurice Robinson (25), from Craigavon, Co Armagh, who was arrested by Essex police at the scene.

Mr Harrison, a dual Irish-British citizen, was arrested in Ireland on foot of a European Arrest Warrant.

At a court hearing last month, the court heard that recordings found on mobile phones belonging to the 39 migrants found dead in the trailer suggest some of them were still alive after entering UK territorial water at 19.42pm on October 22nd, 2018.

Multiple voices could be heard on the recordings.

Mr Kennedy told the court at that hearing that the case as alleged against Mr Harrison couldn’t be “any clearer”.

He alleged that Mr Harrison was “integrally involved” in a conspiracy to traffic illegal Vietnamese immigrants into the UK since as early as 2018.

There were too many “critical missing facts” and the High Court was being asked to fill in too many blanks, she submitted.