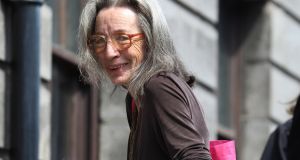 A long-time campaigner against the Shell Corrib gas project in Co Mayo has lost her High Court bid to overturn a ministerial consent for a pipeline bringing gas to a refinery at Ballinaboy.

Maura Harrington, who has opposed the project since 2001, has described it as “a land, sea and air attack on the place that is Erris”.

In judicial review proceedings, she challenged a December 29th 2015 consent, issued under the Gas Act, by then minister for energy and natural resources Alex White for a pipeline transporting gas from the Corrib gas field to the Ballinaboy refinery.

Among various claims, Ms Harrington, representing herself, argued the process under which the consent was issued was flawed and that no environmental impact assessment sufficient to comply with the consolidated EIA directive of 2011 was carried out. She also argued, before “raw gas” could run from point A to point B, various consents had to be in place.

She also sought to rely on the Aarhus Convention concerning public participation in decision-making affecting the environment.

The State and Shell, represented by four senior counsel, disputed her core claim that the EIA directive required an integrated and overarching EIA be provided. They also argued her case amounted to an impermissible collateral attack on the process under which consents were gathered.

On Friday, Mr Justice Michael McGrath said he was dismissing the case and set out his main reasons for doing so.

He said his full lengthy judgment will be made available in two weeks when costs issues will also be addressed.

He held the courts have previously decided the EIA directive did not require the type of overarching integrated assessment contended by Ms Harrington.

He also rejected claims the minister was not entitled to rely on an EIA prepared by other agencies. The directive did not envisage an integrated assessment could be done by just one competent authority and permits the authorities in various EU states to entrust the task of conducting an EIA to other agencies, he said. The ministerial consent was based on the minister’s consideration and adoption of an EIA, an appropriate assessment screening report and a range of other reports and materials provided to the minister.

Ms Harrington’s case was based on a “fundamental misconception” of the relevant law, he ruled.

Despite Ms Harrington’s “strongly held and passionate views” on several matters raised by her, these fell outside the scope of the judicial review, he also held.