High Court judge rules no details of order can be published, adjourns case for three weeks 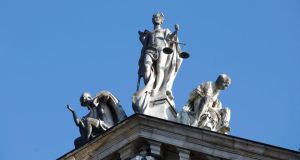 Coverage found in contempt of court: The DPP had claimed the publication of material on the Anglo Tapes was calculated to interfere with the criminal trial process. Photograph: Reuters/Michaela Rehle

The High Court has found Independent Newspapers in contempt of court over part of its Anglo Tapes coverage.

Ms Justice Iseult O’Malley ruled no details of her order could be published yet.

Shane English, for Independent News and Media, asked the judge not to permit publication of a summary of her judgment until he made submissions on the matter. Paul O’Higgins SC, for the DPP, did not object to that application.

The judge agreed to the application but said the fact that the DPP’s application was successful could be published.

She has adjourned the matter for three weeks.

The DPP had claimed the publication of material on the Anglo Tapes was calculated to interfere with the criminal trial process in relation to events at the former Anglo Irish Bank. An injunction had also been sought preventing further publication.

The Independent denied the claims but agreed to remove from its website extracts of the tapes without prejudice to its position in relation to the case taken by the DPP.