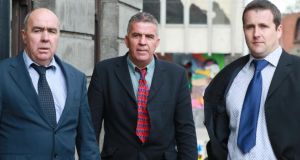 Patrick (left) and Martin O Donnell (centre) and Patrick Coyle. They have sued the Garda Commissioner and State for damages over being allegedly assaulted by gardaí during a 2007 protest. Photograph: Courts Collins.

Two gardaí, a father and son, have denied assaulting protesters during a demonstration against the Shell Corrib gas refinery in Co Mayo.

Garda Marvin Lee said he was pulled into a “frenzied” crowd and was hit by some of the group but had not struck local farmer Patrick Coyle during the protest on January 19th, 2007.

Garda Peter Lee, Marvin’s father, denied a claim he struck Mr Coyle with his fist in the back of the head, knocking him to the ground. He also denied punching two brothers, Patrick O’Donnell and Martin O’Donnell, in the face.

He denied acting in “a wild fashion” or being told by another protester to “calm down”.

He said he was “distraught” that a Garda video recording of the protest had stopped for some eight minutes when the alleged incident was happening and he did not know how or why it had before later resuming.

It was “outrageous” that allegations were made against him and his son, he said. He was concerned his son could have been killed and denied a tale of an attempt on his son’s life was “invented” to disguise Garda “indiscipline”.

Both gardaí were giving evidence in the continuing civil actions by Patrick and Martin O’Donnell, with addresses at Porturlin, Shore, Ballina, and Patrick Coyle, of Barnatra, Ballina, against the Garda Commissioner and State over alleged assaults on them by gardaí during the protest.

The jury heard Garda Marvin Lee, now stationed in Galway, and Garda Peter Lee, stationed in Oughterard, were on temporary transfer to Belmullet in January 2007 for the protests. Gardaí would walk on the middle white line of the road alongside protesters while a convoy carrying Shell workers travelled on one carriageway, the jury heard.

Garda Marvin Lee said protesters were angry and abusive as the convoy passed.  He said one protester stepped over the line in the road and lunged forward at him. As he moved the man back, Patrick O’Donnell grabbed him (Garda Marvin Lee) by the lapels and he was “consumed” into  a “frenzied crowd”, he said.

There was “roaring and screaming” and he tried to protect himself with his arms shielding his head and was getting thumped, he said. He found himself at the wall of Bellanaboy Bridge and felt a hand underneath his right leg before other gardaí dragged him back out. He knew, that if he went over the bridge, he would have been seriously injured, he said.

Under cross-examination, he agreed there was boxing in his family and he won five all-Ireland titles before ceasing competitive boxing in 2004. Boxing was not about “fast hands” and begins with self-defence, he said.

He agreed he had no marks or cuts and said his body was sore from “contact” and that his fleece and epaulettes were torn.

He said he had not alleged Patrick O’Donnell struck him or that Martin O’Donnell or Patrick Coyle assaulted him. He did not see who was striking him. He was not assuming the protesters intended to put him over the bridge but was fearful.

Asked about Patrick Coyle’s evidence of shouting out loud he had been struck by Garda number RG144, Garda Marvin Lee’s then number, he said he had not struck Mr Coyle and did not see his father or any other Garda strike any protester.

Garda Peter Lee said he feared Patrick O’Donnell and others were trying to put his son over the parapet of the bridge.  It was a volatile situation, his hands were raised and he had to use physical force to get his son out and back onto the Garda line but he had not assaulted anyone, he said. The protesters were “very aggressive” and he and his son were getting hit, he said.

Under cross-examination, he agreed the Garda video of the incident featured Patrick and Martin O’Donnell showing facial injuries to the camera and alleging they were assaulted. He agreed neither he nor his son had marks on their faces. Gardaí were wearing a lot of clothing, his son had his head lowered to protect himself and blows don’t always leave a mark, he said.

Sgt John O’Connor said Martin O’Donnell lunged at him, called him a “Free State bastard”, said he was going to kill him if he got a chance and tried to pull off his epaulette.