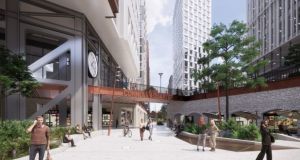 Dublin Cycling Campaign (DCC) is entitled to an order quashing permission for a housing development including 741 build-to-rent apartments on a site at the rear of Dublin’s Connolly Station, the High Court has found.

The proposed development was also to include 135 new car parking spaces which the developer argued did not require permission.

Mr Justice Denis McDonald upheld arguments by Dublin Cycling Campaign that An Bord Pleanála erred in law by not assessing the 135 car parking spaces as part of the planning application.

The effect of that failure was that the development did not constitute a “strategic housing development”(SHD).

The board may only directly grant permission for a SHD development and all other developments have to go through the normal planning process.

In granting permission, the board acted in excess of its powers under section 9 of under the 2016 Development (Housing) and Residential Tenancies Act because the development is not “strategic housing development” under section 3 of that Act, the judge held.

As a result, it was appropriate to grant an order quashing the permission, he said. He rejected various additional arguments by the group.

Final orders will be made next month after the sides have considered the 80-page judgment published on Friday.

Dublin Cycling Campaign CLG, Tailor’s Hall, Back Lane, Dublin 8, is a registered charity with the purpose of making Dublin a safer and better city for cyclists.

Its challenge concerned the board’s permission for construction of 741 build to rent apartments, retail space, and associated site works on CIE lands to the rear of Connolly Station, Connolly Station car park and Sheriff Street Lower. The proposed development forms part of a larger masterplan for the “Connolly Quarter”.

The development site takes in part of a car park used by CIE. Singapore based Oxley Holdings Ltd, the developer, had agreed with CIE to maintain 180 car parking spaces for CIE.

The proposed development includes a new third storey 135 space car parking deck in one of the apartment blocks, extending to about 4,000 sqm. When added to 3,100 sqm commercial units in the proposed development, that exceeds the SHD threshold, with the effect permission must be sought from Dublin City Council via normal planning channels, it claimed.

The Board erred in law in not taking into account works to construct a third floor car parking deck with 135 car parking spaces and access ramps, it claimed. The Board and the developer, a notice party, argued the CIE car park did not require planning permission and did not need to be counted for “other uses” within the meaning of the 2016 Act.

In his judgment, Mr Justice McDonald said, despite conflicting aspects of materials before the board, he believed a reasonably informed member of the public would ultimately conclude Oxley had not sought, and the board had not granted, permission for the use of the deck as a car park. However, the material would clearly convey Oxley intended to use the deck as a car park in accordance with its contractual obligation to CIE and he could see no basis, as Oxley urged, to regard the deck as having a “nil” use.

The plans and other materials before the board all told the board the intended use is as a car park, albeit one which Oxley had been advised did not require a separate planning permission, he said.

Because the car park use was required to be counted for the purposes of the 4,500 square metre limitation on “other uses” in the definition of SHD contained in section 3 of the 2016 Act, the board’s permission was in excess of its powers under the Act, he held.

It was “wholly implausible” to suggest the proposed use of the deck as car park does not fall, “as a matter of simple fact”, within the ambit of “other uses on the land included in the proposed housing development, he said.

The developer “took an informed decision to deliberately not include” an application for the car park, he said. Had it done so, the Board would have been forced to conclude the proposed development was not SHD.