Court order was not intended to stop reporting of Dáil, says judge

Reaction to High Court ruling by Mr Donald Binchy that an order made by him preventing publication of financial information about Denis O’Brien wasn't intended to prohibit fair reporting of any utterances of the Dáil. Video: Bryan O'Brien 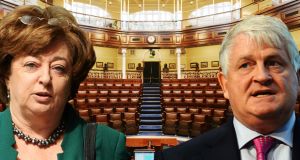 An order preventing the publication of financial information about Denis O’Brien was not intended to prohibit fair reporting of any utterances of the Dáil, the High Court judge who made the order has said.

Mr Justice Donald Binchy said it was understandable that parties had come to court to seek clarification, but he had not intended in his High Court order on May 21st to inhibit the entitlement of media to report on utterances of the Dáil.

The Irish Times and RTÉ went to the High Court this morning seeking confirmation that a speech made by Deputy Catherine Murphy in the Dáil could be reported by the media.

While speeches in the Dáil are normally privileged by Article 15.12 of the Constitution, and can be reported, the contents of Ms Murphy’s speech included financial information about businessman Denis O’Brien, some of which was included in a High Court order that barred its publication.

The interlocutory, or temporary, injunction was made by Mr Justice Binchy last month on foot of an application by Mr O’Brien who sought to prevent RTÉ from broadcasting information about his bank dealings with the Irish Bank Resolution Corporation.

Mr Justice Binchy also said this morning he had reviewed his May 21st judgment, which was not published pending redaction of sensitive information, and there seemed to be no purpose served by redacting it, given what was now in the public.

Earlier, Michael Cush SC, for Mr O’Brien, told the court he would be making an application to vary the order the judge had made to allow for the reporting of Ms Murphy’s remarks.

He also said he would apply to the High Court in separate proceedings seeking to establish the correct demarcation of the respective roles of the courts and the Oireachtas.

Mr Cush said on May 6th, Ms Murphy had put on the record of the house certain information Mr O’Brien had been seeking to keep confidential. The Ceann Comharile had asked her to desist, but she persisted. He said he believed she was in breach of standing orders of the Dáil by doing so.

He said when his client commenced his application to prevent RTÉ’s broadcast, he acknowledged it was pointless to restrain what Ms Murphy had revealed. But he argued his personal details did not contribute to the public interest.

Mr O’Brien got his order on May 21st having met the “elevated standard” that, at full hearing, the application was more likely than not to succeed, Mr Cush said. He said the deputy then issued a statement expressing her disappointment and on May 28th, she returned to the House and “in conscious disregard” of the order and in breach of standing orders, she again put material on the record.

Mr Cush said the material was inaccurate, but acknowledged this was “legally irrelevant”. It was carried live on Oireachtas TV and Ms Murphy caused it to be uploaded onto Youtube, he said. It received very extensive coverage and others took the view it could be published. The result was that further information was put into the public domain and another part of Mr O’Brien’s case was determined, Mr Cush said.

He said it no part of Mr O’Brien’s case to seek to restrain the utterances of the Dáil.

Ms Murphy had said what she said and it was only right that newspapers and RTÉ are entitled to report it, he said. This was why he was seeking a variation of the original order.

David Holland SC, for RTÉ, said it would be churlish not to welcome Mr O’Brien’s application, minimal though it was. He also said he was not informed of Mr O’Brien’s intending application until minutes before the court sat.

He referred to a “spectacular climbdown” by Mr O’Brien. However, Mr Cush said the climbdown claim was “not correct” as “absolute consistency” in Mr O’Brien’s position.

He said, the difficulty RTÉ found itself in was that what Mr Cush offered was very limited.

“For all we know there may be many more utterances ... we can’t come in to court every time,” he said.

He said they would proceed with their application.

He also said Mr O’Brien’s perception that RTÉ’s intention is to attack him was wrong. Mr Holland said Mr Cush took pains to make observations on whether or not Ms Murphy was in breach of standing orders, but that was a matter for the Oireachtas, and the view widely expressed was that she was within her rights.

Referring to an article in The Irish Times, he said it was an entirely new aspect that Mr O’Brien had taken the opportunity of the controversy not merely to state Ms Murphy was incorrect, but that she “dishonestly pedalled lies”.

He highlighted that when other media organisations did publish Ms Murphy’s comments they received solicitor’s letters threatening them with proceedings. To come to court and say they never intended to restrict reporting was “rich”, he said.

“Mr O’Brien has made a spectacular climb down from that correspondence,” Mr Cush said.

The judge then made his remarks clarifying his judgment.

Michael O’Higgins SC, for The Irish Times said the necessity to report what was said in the Dáil was essential to newspapers and particularly to The Irish Times. He also refuted the claim that Mr O’Brien had not intended to restrain Dáil reporting. The paper was contacted and told publication would be met by enforcement.

He also said The Irish Times had not reported Ms Murphy’s comments “in broadsheet form” and had intended seeking clarification from the courts.

Ms Murphy was also represented in court. Ross Maguire SC, said he had “a watching brief” her behalf.