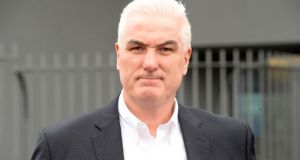 Anti-eviction activist Ben Gilroy has been jailed for three months over failure to comply with a High Court order to complete 80 hours community service after he admitted criminal contempt.

On Wednesday, Mr Justice Brian McGovern found there was a “deliberate and conscious” breach by Mr Gilroy of the October 2017 community service order, arising from his admission earlier that year of criminal contempt.

The contempt related to Mr Gilroy having, in a sworn statement in proceedings by Allied Irish Bank seeking to enforce a €3.2 million judgment against another man, accused the court of “criminal intimidation and threats” and compared the action of a court to that of “a thief putting a gun to his head and robbing him of his wallet”.

Mr Gilroy, Riverview, Athlumney Abbey, Navan, Co Meath, had also alleged he was “threatened by members of a semi-secretive society wearing wigs and black cloaks” who believe they are “superior to other members of society” and who “act in a clandestine fashion to hide their criminality”.

In July 2017, the judge had said Mr Gilroy had accused the judge of being “in breach of his oath of office” and of taking part in, and allowing criminal activity to take place in front of him.

The affidavit also contained further threats against the judge and the solicitor and counsel for AIB, he said.

After Mr Gilroy admitted contempt, apologised and said he was willing to undertake community service, the matter was adjourned and the October 2017 order later directed he complete 80 hours community service.

In evidence to the judge, two probation service officers said Mr Gilroy had not performed any community service since the order was imposed.

Both agreed Mr Gilroy had told them he was willing to do the service but had raised issues alleging AIB’s title on the court order was incorrect and had also referred to a Supreme Court appeal.

Mr Gilroy, in sworn evidence, said he was willing to perform the community service and had so informed the probation service. He said there was “no animosity” between him and the service, he had turned up for every meeting with it that he was required to and had also contacted charity shops about hours for service.

His difficulty arose from the October 2017 order incorrectly identifying the title of AIB, he said. He said he had previously successfully raised the issue of AIB using incorrect title with another High Court judge and alleged the bank had behaved fraudulently concerning title.

He referred to an issue about a comma, said it was a “very serious” thing to ensure “true title” and he wanted the October 2017 order to reflect the “true title”.

In his ruling, the judge said what was before him was the October 2017 order against which there was no appeal and he was not concerned with any other order. He had been lenient with Mr Gilroy in not sending him to jail and the issue now was whether he had complied with the October 2017 order.

That order provided, if there was default on the community service, Mr Gilroy would be jailed for three months over failure or refusal to comply.

The probation service has since informed the High Court chief registrar Mr Gilroy had not served the community service and provided a report to that effect.

He was “quite satisfied” there had been conscious and deliberate refusal to comply with the order and it followed Mr Gilroy must now serve a sentence of three months imprisonment.