Action over valuable horses being moved to Ireland is settled 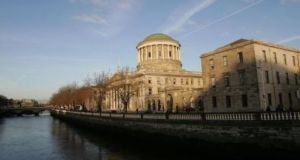 Two horses are Milton, a stallion which had been pre-selected to represent Belgium in next year’s Olympic games and a gelding, Diego, expected to compete in the next European Championship. The third horse is named Isidor.

A legal action which was initiated over two valuable horses being moved to Ireland from Belgium has settled at the High Court.

Mr Justice Brian O’Moore was told by Bernard Dunleavy SC on Thursday the settlement was confidential. He was also told three horses are to be sent to Belgium.

They include two horses with a combined estimated value of up to €5m. The two are Milton, a stallion which had been pre-selected to represent Belgium in next year’s Olympic games and a gelding, Diego, expected to compete in the next European Championship. The third horse is named Isidor.

Mr Dunleavy, for Mexican businessman Jose Alfredo Hernandez Ortega and his company, Leeston Enterprises SA, the plaintiffs in the case, said the sides had agreed the case could be adjourned to later this month when, on the basis of compliance with the terms of settlement, the entire proceedings could be struck out.

The agreement resolved the entire business relationship between the parties, counsel added. The proceedings were brought against Mr Ortega’s former partner Martina Romagnoli and several Irish registered companies of which she allegedly is the sole director.

It was alleged Ms Romagnoli uses the companies to operate a business, Bunmahon Sporthouse Stud and Insemination Centre, in Co Waterford. The proceedings were also brought against Richard Fitzgerald and Ballinasisla Stud Ltd, a company which he owns and controls. It was also alleged Mr Fitzgerald is the secretary of Ms Romagnoli’s Irish registered companies.

Last July, the plaintiffs got a temporary injunction preventing Milton and Diego being sold or moved out of Ireland.

The order was granted after Italian-based Mr Ortega claimed his former lover, with whom he has a child, removed several horses, which he claims are his, from a stud farm in Belgium, owned by her, without his consent.

When the injunction matter returned before the court a week later, it was told it had been confirmed Milton and Diego were at a stud farm in Waterford and that Ms Romagnoli contended she owns a 50 per cent share of each of those two horses. .

Ross Aylward BL, instructed by Gavin Simons of Amoss Solicitors, for the defendants, said Ms Romagnoli was taking the matter “extremely seriously” and wants it heard as soon as possible.

While prepared to leave the injunctions in place, she was opposed to a “novel” application by the plaintiffs to appoint receivers over the horses, he added.

Counsel said Ms Romagnoli has a considerable reputation as a trainer in the showjumping world, has worked with horses that participated in the Olympic Games and having horses placed under control of receivers would damage her reputation.

No semen had been taken from Milton by his clients, counsel added.

Mr Aylward further indicated it was hoped, given the past relationship between the couple, and that they have a child together, that mediation might be considered.