€63,000 for woman left with forehead scar after ‘negligence’ in care 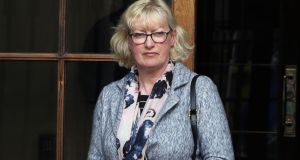 Concepta Anderson has been awarded €63,000 damages from the High Court over negligence in her post-operative care at St James’s Hospital in Dublin. Photograph: Collins Courts.

A woman has secured €63,000 damages from the High Court over negligence in her post-operative care at St James’s Hospital in Dublin after the removal of a heart pacemaker.

Concepta Anderson (58), of Sooey, Co Sligo, sued the hospital after she had an episode of syncope (heart stoppage leading to a blackout) and fell while in a hospital toilet on May 18th, 2014.

The incident happened while she was recovering from a procedure to remove her permanent pacemaker the previous day and while awaiting the insertion of another pacemaker. She suffered a head injury and has a permanent scar on her forehead as a result of the fall.

Before she had a pacemaker, Ms Anderson had a history of falls and syncope and was a fall risk following the removal of her pacemaker, Mr Justice Anthony Barr noted in his reserved judgment on Wednesday.

He found there was negligence by her consultant cardiologist in not ensuring clear instructions were given to nursing staff that Ms Anderson was a fall risk and therefore should be confined to bed and only permitted to walk about with supervision.

As a result of that failure, Ms Anderson was not instructed to stay in bed and was allowed move freely within the range of her telemetry monitor, thereby exposing herself to a risk of serious injury, he held.

Ms Anderson had waved off her visitors on two occasions from the top of a stairs and, if she had had a syncope episode on either occasion, could have fallen down the stairs and suffered serious injury, such as a fractured skull or spine, he added.

The judge said the claimant was fortunate that, when she did have the syncope episode, she was in the toilet. He dismissed additional claims of negligence in relation to a decision not to insert a temporary wire following the removal of the pacemaker and prior to the insertion of the replacement device.

Doctors were entitled to make that decision having balanced the risk of infection from insertion of a temporary wire against the risk of fall and there was no negligence in that regard, he said.

Ms Anderson suffered a moderate head injury as a result of the fall, he said.

She suffered a blow to her head which caused a laceration which did not require suturing but has been left with a permanent scar in her left upper forehead. There was also nerve damage in that general area, which causes unpleasant symptoms of altered sensation.

She had also suffered anxiety and sleep disturbance , which are symptoms of acute stress disorder, he said. That required treatment in the form of medication for three years after the accident but she appeared to have made a full recovery from her psychiatric injuries.

He accepted Ms Anderson is embarrassed by her forehead scar which, while not unsightly, was permanent. Taking all those matters into account, he assessed total damages at €63,112.

The judge will deal with legal costs issues at a later date.