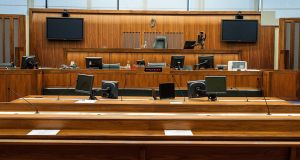 The first trial at the new Special Criminal Court opened in Dublin on Thursday when a Dublin man denied membership of a dissident republican terrorist organisation.

Justice Minister Frances Fitzgerald said the establishment of a second non-jury court was necessary to deal with the backlog of cases in the court, which meant a delay of up to two years in cases coming to trial.

Ryan Glennon (25), of Macken Villas, Macken St, Dublin pleaded not guilty to membership of an illegal organisation styling itself the Irish Republican Army, otherwise Óglaigh na hÉireann, otherwise the IRA on May 13th, 2015.

Prosecuting counsel, Tara Burns SC, said the court would hear the belief evidence of a Garda Chief Superintendent that Mr Glennon was a member of an illegal organisation on the date in question.

She said the court would also hear supporting evidence of that belief relating to a search of a property at Courtown, Co Wexford on May 13th, 2015. She said that a large quantity of explosives was found at that property and there would be evidence connecting Mr Glennon to the property.

Ms Burns said the court would also hear evidence of Garda surveillance of Mr Glennon and two other individuals carried out on May 9th, 2015. The same three people were also seen together by gardaí on dates in March and April, 2015.

Counsel said that during interviews carried out after his arrest, Mr Glennon failed to answer material questions and the court would be entitled to draw inferences from that.

Detective Sergeant Daniel O’Driscoll, Special Detective Unit, said that he was part of a team that searched the house at Harbour Court, Courtown on May 13th, 2015.

Gardaí gained entry and in a small toilet he saw a green water butt. When the lid was removed he saw a plastic bag and other items.

He also saw a lunch box which had been adapted with a switch on it. He had experience of similar adapted lunch boxes.

In the kitchen he saw plastic bags, a grey canvas bag and white protective suits. He said that gardaí called the Explosive Ordnance Disposal from the Defence Forces and evacuated the house and nearby premises for safety.