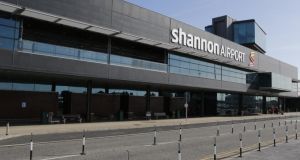 Two former US servicemen have been remanded in custody charged in connection with an alleged security breach at Shannon airport on St Patrick’s Day.

Defence solicitor Daragh Hasset said his clients, who were each wearing black and white “Veterans for Peace” tops in court, assured him they were “men of honour who have served in the US defence forces and will return to Ireland for their cases”.

Saying they are facing “very serious charges”, Judge Keane remanded the two men in custody to appear via video link from prison at Ennis District Court on Wednesday.