Man who performed ‘exorcisms’ on his girlfriend cleared of assaulting her 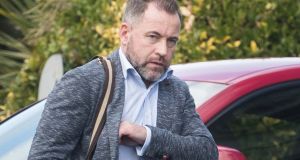 Shane Gibbons told the court that at one stage he got a parish priest to say a prayer over the complainant when they were still together.

A Co Clare man who told gardaí that he carried out a number of exorcisms on his then girlfriend has been cleared of assaulting her.

Shane Gibbons (48) told Killaloe District Court, sitting in Ennis, the injuries caused to his then girlfriend may have been caused by demonic possession or by self-harm “but they were not caused by me”.

Mr Gibbons of Ballynagleragh, Ogonnelloe in east Clare denied the charge of assault causing harm to the woman at his home on August 17th, 2019.

In dismissing the charge, Judge Patrick Durcan said Mr Gibbons’s defence and version of events concerning the occult, exorcisms and devilish possession should have been explored more by the State.

The judge also said he found the complainant “to be less than fulsome” under cross-examination. He noted she remained silent when questioned about previous unexplained injuries she sustained, which she had allowed Mr Gibbons take photos of.

Solicitor for Mr Gibbons, Daragh Hassett, read out a text sent by the complainant in the past to Mr Gibbons which read: “I am so glad. I knew I needed the exorcism.”

Under cross-examination from Mr Hassett, the woman denied she was possessed by demons. When asked to comment on the text message, she told the court that what took place was not an exorcism.

Asked about the unexplained bruising to her body in photos that Mr Gibbons had taken previously, the complainant stated: “I don’t know what caused the bruising.”

Judge Durcan said there were “so many conflicting and unsatisfactory aspects” to the case he was “not satisfied to convict”.

He did find Mr Gibbons held the complainant by the shoulder on the night but it was done in circumstances where there was no intention to cause any harm.

In her evidence, the Co Limerick woman said Mr Gibbons flipped her onto her back and and pinned her down on the bed in the bedroom of his home in the early hours of August 17th, 2019.

She alleged Mr Gibbons continued to shake her “forever”. She said her upper body was bruised along with bruising to her thighs, wrists, face and neck. She called gardaí when he left the bedroom. The two were together for three years and their relationship ended that night, the court heard.

Garda Darren McLoughlin said when gardaí arrived at the home, the complainant was in a very distressed state. She allowed gardaí to take photos of the bruising and they were shown in court.

The garda said when Mr Gibbons was shown the photos he claimed his then partner was demonically possessed and he had carried out exorcisms on her.

In his statement , Mr Gibbons said he showed Garda McLoughlin a video of him performing an exorcism on the complainant in 2016. He also provided a picture of her being attacked by a “demonic entity” in 2016. The photo showed scrape marks to her buttocks and ribs.

Mr Gibbons told gardaí an “exceptional evil entity was using her own abilities for its own purpose. It was able to perform tasks and use her ability for dark purposes. It could take control of her at will and engage me in conversation — sometimes in Latin.”

He also told gardaí that when the woman was low, she was “particularly vulnerable to demonic influences”and could be “pulled from the bed and physically assaulted for hours”. He said when he confided in his family “they expressed considerable concern that if any of these entities were successful in causing her death that the finger would inevitably be pointed at me”.

Asked by Judge Durcan to comment on Mr Gibbons’s ‘exorcism’ video, Garda McLoughlin stated: “There is something there when viewing the video. It is very, very strange and you do see her scraping herself.”

Mr Hassett said that in the video the complainant appears to be a trance state and is incessantly scratching her wrists.

Asked by the judge if he accepted the woman had “been the subject to possession by a demonic force”, Garda McLoughlin said her“wouldn’t believe in that stuff but it is a very strange case”.

He said the photos of the complainant’s injuries from 2016 and from August last year “would show similar injuries”.

In direct evidence, Mr Gibbons denied any assault in August 2019. He said at one stage he got a parish priest to say a prayer over the complainant when they were still together. “I know she doesn’t speak Latin but I got text messages in Latin from her,” he said.