Man in court charged with manslaughter at Cork soup kitchen 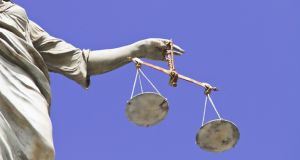 Adrian Henry, an English national, was charged with the manslaughter of James Duncan (40) at Patrick Street in Cork on September 12th 2019 when he appeared at Cork District Court on Wednesday.

A 48-year-old man has been remanded on a bail after he was charged with the manslaughter of another man who was allegedly assaulted while attending a soup kitchen in Cork city centre over a year ago.

Adrian Henry, an English national, was charged with the manslaughter of James Duncan (40) at Patrick Street in Cork on September 12th 2019 when he appeared at Cork District Court on Wednesday.

Mr Duncan from Dunmore Gardens, Knocknaheeny in Cork, had been availing of a soup kitchen when he was allegedly assaulted on Patrick Street and he was taken by ambulance to Cork University Hospital.

Mr Duncan underwent emergency surgery for traumatic brain injuries and he was later put on a ventilator. However he died on October 25th 2019.

On Wednesday at Cork District Court, Det Garda Neil Walsh of Anglesea Street Garda station gave evidence of arrest, charge and caution and told the court Mr Henry replied “not guilty” when the manslaughter charge was put to him.

Sgt John Kelleher said that the DPP had directed that the matter be dealt by way of trial by indictment before a jury and jury at Cork Circuit Criminal Court and he applied for an adjournment until February 17th.

Det Garda Walsh said that garda had no objection to bail for Mr Henry once he abided by certain conditions including that he reside at an address at Seminary Road in Blackpool in Cork and notify gardaí in writing of any change of address.

He also said that gardaí were seeking Mr Henry to sign on every Monday, Wednesday and Friday at Anglesea Street Garda station, provide gardai with a mobile phone number that he can be contacted 24/7 and stay off intoxicants.

Mr Henry’s solicitor, Frank Buttimer said his client, whom the court heard had been in rehabilitation abroad, was willing to abide by the terms sought by gardaí and he told the court, a book of evidence would be required in the case.

Judge Olann Kelleher granted Mr Henry bail and remanded him on his own bond to appear again at Cork District Court on February 17th, advising him that any breach of his bail terms could lead to him being detained in custody.