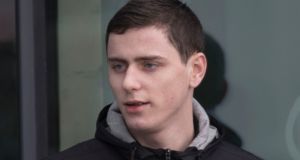 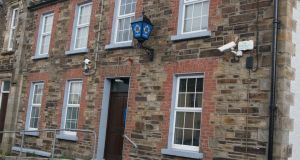 A man broke into a Co Donegal garda station and defecated on the counter before stealing items including hats, vests and radios, a court has heard.

Michael Brennan (21), of Conewburrow, Lifford, appeared at Letterkenny District Court on Tuesday and pleaded guilty to causing criminal damage during a burglary at Lifford Garda station.

CCTV footage showed that Brennan broke into the station through a side window just before 5am on September 5th, 2015.

The court heard that he was seen going to the toilet on the counter of the station before leaving wearing a garda hat. A swab was taken from the faeces in an attempt to identify who was responsible, the court heard.

CCTV footage showed Brennan walking down Bridge Street towards Strabane wearing one of the garda hats. He was eventually apprehended by the PSNI in Strabane. Members of Brennan’s family helped to recover the stolen items, apart from the Garda torch.

The court heard that Brennan had appeared at Strabane Magistrates Court in connection with the matter and was jailed for three months for possession of stolen goods.

Donagh Cleary, solicitor for Brennan, said “it was a fair cop in every sense of the word”.

He said his client had suffered from drink and drug addiction but was now back in the care of his father and living in Lifford. He added that Brennan had been punished in Northern Ireland for the crime and that there was no loss involved apart from the need to clean-up the garda station.

Judge Paul Kelly said there was indeed a cost to the state for Brennan’s “disgusting behaviour”.

Garda Insp Sheridan said it cost €225 to clean up a cell if damaged and this would probably have cost the same amount.

“There was a repulsive message in what he did and a clear message was sent to the authorities and also by the way he paraded around,” the judge added.

The case was adjourned until June 11th to allow for the €225 to be paid to gardaí. He said he would keep in mind that Brennan had already served a sentence in connection with the crime in Northern Ireland.