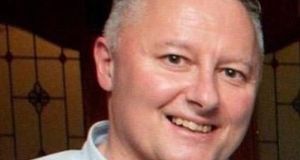 The book had been left out on the counter at Dublin’s Blanchardstown garda station for the public to sign following the death of Detective Garda Horkan. Photograph: An Garda Síochána/PA Wire

A 23-year-old man accused defacing a book of condolence for Detective Garda Colm Horkan has been remanded in continuing custody pending directions from the Director of Public Prosecutions.

The book had been left out on the counter at Dublin’s Blanchardstown garda station for the public to sign following the death of Detective Garda Horkan who was shot a number of times while responding to an incident in Castlerea, Co Roscommon last week.

Jason Hennessy from Sheephill Avenue in Blanchardstown is charged with criminal damage to the book of condolence which was allegedly defaced on Friday afternoon, and with violent behaviour at the station following his arrest.

Judge Victor Blake noted from defence solicitor Amanda Connolly and the court sergeant that directions from the Director of Public Prosecutions were not yet available.

Judge Blake remanded him in continuing custody to appear again on July 7 next.

Garda Sergeant Alan Lynch had told Judge Gerard Jones at Blanchardstown court on Monday that the book had been left out on Friday morning for members of the public to pay tribute to the late Det Garda Hokan. It was supposed to be given later to the Horkan family.