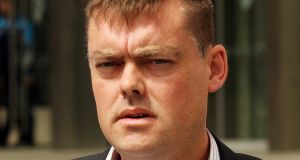 A garda effectively “wrote his own P45” when he illegally accessed the personal details of individuals on An Garda Síochána’s Pulse system and passed them on to third parties, a judge has said.

Joseph O’Connor (38), of Morrell Grove Naas, Co Kildare, appeared before Dublin District Court to be sentenced after he pleaded guilty earlier this month to three offences under section 22 of the Data Protection Acts.

The court heard that the now former Dublin-based garda had accessed the personal data of three separate individuals on dates in June 2011, June 2012 and February 2013 without the authority of the data controller, An Garda Síochána, and had disclosed them to other individuals.

Judge Michael Walsh noted the case had first come before the court on July 11th, when the facts were outlined by Supt George Kyne, who prosecuted the offences.

The Director of Public Prosecutions had directed summary disposal on all three charges, subject to the proviso that the accused enter a guilty plea on all of them.

The judge said gardaí must at all times comply with data protection legislation and that there was also a data protection code of practice that covered how they used, kept and destroyed personal information.

The judge said he was satisfied from the evidence of Supt Kyne that the accused had committed a “serious breach” of data protection legislation in respect of the three offences, and indeed also in relation to the code of practice in An Garda Síochána.

They were “particularly serious offences” carried out by a garda acting in the course of his duty.

Judge Walsh said Mr O’Connor, on becoming a member of the force, had taken an oath to faithfully undertake the duties of An Garda Síochána with integrity and honesty and upholding the Constitution and the rule of law.

That was a strong oath and the accused, in committing these offences, had been in breach of his oath.

He noted Mr O’Connor had been previously of good character and had an unblemished record of service during his 11 years in An Garda Síochána.

“On the date he committed the first offence in mid-June 2011, he effectively terminated his own employment – he effectively wrote his P45 on that occasion,” the judge said.

He noted that Mr O’Connor had now tendered his resignation, which was of some value as it had saved his employer the time and expense of proving proceedings against him with the objective of terminating his employment.

He had lost his career, the judge noted.

The judge said Mr O’Connor was entitled to the benefit of his early plea and the fact that he had cooperated fully with the inquiry.

It also appeared he had not benefited materially from his disclosures. It was of particular significance, and he was accepting the evidence of the superintendent in this regard, that the disclosures had not caused any loss or damage to any party involved, which was “fortunate”.