Conor McGregor told he can pay €400 speeding fine in instalments

Conor McGregor has been fined €400 in Blanchardstown District Court for driving at 158kph on the Naas road near Dublin. Video: Jack Power 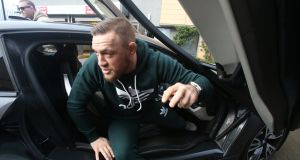 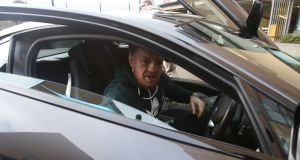 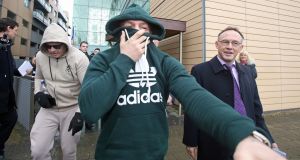 Conor McGregor has been fined €400 for driving at 158km/h on the Naas road near Dublin.

The multimillionaire sportsman has been given two months to pay the bill, in instalments if he wishes.

The court heard notices to pay a fine in relation to the incident were twice sent to McGregor. McGregor’s lawyer Graham Kenny told the court McGregor had attempted to pay the fine, and wanted to plead guilty.

Mr Kenny said McGregor had filled in his name incorrectly when he returned a fixed charge penalty notice over the incident. The fighter left his middle name Anthony off the form, the court was told earlier.

When McGregor was asked by the judge if he remembered speeding on the day in question he said, “emm I can’t remember to be honest, what I did also hear is I tried my best to pay for it”.

McGregor entered a guilty plea, and when asked by the judge why he failed to pay the fixed charge notice he said, “I don’t know, I didn’t pay and that’s it”.

To which the judge replied, “that’s not it”.

Addressing McGregor the judge said, “I have to ask, how much do you earn – and don’t say €110 million in one day.”

McGregor responded to say, “140”, while laughing.

The judge issued McGregor a €400 fine which he has two months to pay. “You can pay that in instalments,” she said, at which point McGregor burst out laughing.

The judge also added that “in spite of your good fortune in life” that McGregor had to be “cognisant” of others on the road.

McGregor said: “I apologise for that, I wanted to show my respect by showing up here today, and I will pay the fine.”

Following the verdict McGregor and another individual got into a BMW i8 and drove off.

McGregor was recorded by gardaí driving at 158km/h on the N7 Naas Road at Rathcoole, Co Dublin, on March 31st.

Earlier the judge told McGregor’s solicitor that McGregor would have to attend in person. The judge said the case had been mentioned on two previous occasions and she was annoyed that he was not in court to give evidence in person.

“Like everybody else, if he’s putting in a plea of mitigation he has to be here,” she said.

Mr Kenny said he would contact the UFC lightweight champion.

The judge added: “I’m giving him one more opportunity. If he’s not here the next time I’m going to seek a bench warrant. This is like a broken record.”

She said she had already dealt with McGregor’s business associate and business manager at previous court hearings and was now dealing with the case through his solicitor.

“This is absolute disrespect to the court,” she said. “I’m very annoyed with Mr McGregor in the same way I’m annoyed with any other defendant.”

She told Mr Kenny: “You can tell him there’ll be a bench warrant coming his direction if he’s not here.”

A short time later, McGregor turned up at the courthouse.