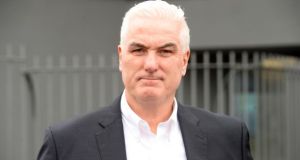 Mr Gilroy, with an address at Riverview, Athlumney, Navan, stood as candidate in last year’s election to the European Parliament.

In a prosecution taken by the Standards in Public Office (Sipo) Commission, Mr Gilroy was charged that on July 18th last year, having been his own election agent and being unsuccessful in the election, he failed to furnish to Sipo a written statement within 56 days of polling day giving details of all expenses incurred by him, in breach of the Electoral Act 1997, along with any vouchers.

He was also charged with failing to fill in a form required by Sipo under the same legislation. No plea was entered.

Sipo was represented in court by State Solicitor for Meath Liam Keane.

Judge Cormac Dunne adjourned the case to January 22nd next.