Data ruling against Shatter was pre-judged and flawed, court told 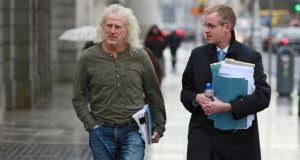 The Data Protection Commissioner (DPC) pre-judged his inquiry into former minister for justice Alan Shatter and made “serious errors” in deciding that he breached data protection laws by divulging information about a political opponent on television, a court has been told.

The claims were made at the opening of Mr Shatter’s appeal against the commissioner’s decision on a complaint taken by Independent TD Mick Wallace after the then minister last year told RTÉ’s Primetime that Mr Wallace had been cautioned by gardaí for using a mobile phone while driving.

Eileen Barrington SC, for Mr Shatter, told Dublin Circuit Civil Court that the decision had consequences for the former minister “personally, politically and professionally” and was “a factor” in his resignation last May.

Ms Barrington said there was a “clear absence” of fair procedures in the DPC’s decision-making process. She told the court that on the same day that Mr Wallace lodged a complaint against Mr Shatter, the DPC made a statement to RTÉ News to the effect that personal data had been disclosed during the Primetime debate. This showed a “predetermination of matters” and was “quite inappropriate”.

She said that in a letter to Mr Shatter the following day, the commissioner said he was satisfied that personal data about Mr Wallace had been processed by the then minister. “The DPC wrongly started the process with the expression of a conclusion,” she said, adding that there appeared to be a “rush to judgment”.

Ms Barrington said the DPC’s decision was “flawed” and wrongly applied definitions in the data protection laws. Mr Shatter could not be a “joint controller” of personal data, as the DPC stated, because he “clearly” did not control its content and use. The information about Mr Wallace was passed to him orally by the Garda Commissioner and he never saw any relevant written records.

He did not make a note of the information; it merely “resided in his mind”, Ms Barrington said, and he would be concerned if the data protection laws could be used to regulate information or the processing of information “in someone’s mind”.

Ms Barrington told Judge Jacqueline Linnane that being a joint controller was “all about responsibility”, and it could not reasonably be suggested that Mr Shatter was the person responsible for this information.

Neither was the information “kept” by Mr Shatter, within the meaning of the Data Protection Act, as this implied more than a “transitory period of retention”.

Barrister Paul Anthony McDermott, for the DPC, told the court that Mr Shatter had no right to take the appeal. He said that at all stages the complaint to the DPC was made against the minister for justice, “who happened to be Mr Shatter at the time.”

Mr Shatter’s correspondence with the DPC, on ministerial headed notepaper, made clear that he had acted at all times in his capacity as minister, Mr McDermott said, and the only person who could take such an appeal was Frances Fitzgerald, the current minister for justice.

“This appeal failed from the outset because it is brought by someone who doesn’t have a right to take an appeal.”

On the DPC’s decision, Mr McDermott said there was no pre-judging. By agreeing to investigate the complaint rather than dismissing it as frivolous or vexatious, the DPC was by definition accepting there was a prime facie case to answer. If Mr Shatter felt the DPC was acting inappropriately, he should have asked the commissioner to hand over the complaint to someone else at that time. Instead he “rolled up his sleeves” and engaged with the process.

Mr McDermott disputed the claim that the information about Mr Wallace was not personal data. “It’s nobody’s business if you have an interaction with the gardaí. That is private,” he said.

“It’s clear that the commissioner and minister Shatter were jointly in control and deployed the information for a purpose.” It was irrelevant that Mr Shatter had not seen the internal Garda email where the information about Mr Wallace was recorded, he added, as it was in his power to obtain it. “He has the email, in effect, if he wants it.”

If anything, Mr McDermott said, the DPC “bent over backwards” to be fair to Mr Shatter. A draft decision circulated to the parties described the information as “sensitive personal data” but when Mr Shatter argued that it could not be described as sensitive, the DPC found in his favour on this point.