Jury in double murder hears of efforts to identify vehicles 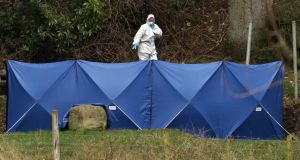 The jury in a double murder trial has heard evidence about a reconstruction carried out in an effort to identify vehicles caught on CCTV near the killing.

An image scientist gave the evidence to the Central Criminal Court in the trial of a Dublin man, charged with murdering two fellow Dubliners in a Louth forest five and a half years ago.

Jason O’Driscoll (34), with an address at Richmond Avenue, Fairview, has pleaded not guilty to murdering 31-year-old Anthony Burnett and 25-year-old Joseph Redmond in Co Louth on March 7th, 2012.

The trial has heard that firefighters were called to a burning car in Ravensdale Forest Park shortly before 11pm that night. The bodies of the two car thieves were discovered inside, with gunshot wounds to their heads.

His colleague, Andrew Wooller, testified on Tuesday that he had viewed CCTV footage of the vehicles. He had no knowledge of any suspect vehicles and made a number of conclusions. He then suggested that gardaí provide a number of vehicles for a reconstruction.

Mr Cass told Alexander Owens SC, prosecuting, that they had put about a dozen different vehicles through the reconstruction.

He explained that they would usually do a ‘direct overlay comparison’ of the original and reconstruction images.

However, there were operational reasons why they couldn’t close the road and spend a lot of time repositioning vehicles on the night. Instead, they had them driven the routes in question at a slow speed for a side-by-side comparison.

Mr Wooller had already testified that the reconstruction was of reduced value, as both CCTV systems had been changed in the meantime.

However, he concluded from his initial viewing of the original footage that the large, light-toned car that passed a camera in Ravensdale before 11pm was consistent with a Mercedes and not inconsistent with the Mercedes S Class.

He also concluded that the dark-toned hatchback car that followed it four seconds later could be a Volkswagen Golf or two other makes.

It’s the State’s case that the two shooting victims had stolen a black Volkswagen Golf from a home in Dublin in the early hours of March 7th, and had driven it north that night with the intention of selling it to the accused.

Outlining the prosecution case at the start of the trial, Mr Owens said the two deceased had pulled into a layby at Ravensdale Forest Park around 10.45pm. They were shot in the head and the car set on fire.

The jury heard that a silver, southern-registered Mercedes was found abandoned in the village of Meigh the following morning.

Mr Owens said that this was the stolen car in which the accused and another man had left ‘the assassination’ in Ravensdale the night before.

The trial has now gone into legal argument before Mr Justice Patrick McCarthy and will continue on Friday before the jury of eight men and four women.