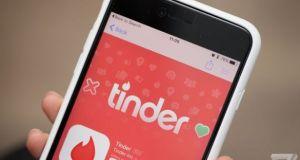 The complainant and the defendant met up days after they began communicating on Tinder.

A Central Criminal Court jury has acquitted a man of raping a woman on a first date after they met on the dating app Tinder.

The Dublin man (35) was alleged to have raped the university student in his car after driving her up to the Dublin Mountains.

He pleaded not guilty at the Central Criminal Court to rape at Kilmashogue Lane, Rathfarnham, Co Dublin on September 11th, 2014.

On day seven of the trial, the jury of six men and six women returned a verdict of not guilty after just over four hours of deliberations.

The man responded by pressing his hands together in a praying gesture and saying: “Thank you, thank you so much”.

A female cousin began crying and hugged him.

A female juror also began crying and the complainant burst into tears and was comforted by her parents in the back of the courtroom.

Mr Justice Paul Butler said the man was free to go on this matter but Cathleen Noctor BL, prosecuting, said the defendant was in custody on other matters.

The jury heard that the two met up days after they began communicating on the Tinder dating app and they went for a drive together. The complainant alleged the defendant drove them to an unlit country road.

The man told gardaí they had consensual sex without a condom. He suggested she made the allegation of rape because she was annoyed at him after he ejaculated inside her instead of “pulling out”.

The court heard that in the 36 hours after the alleged rape, the woman chatted with six men on Tinder. She told one of them she had “a naughty side”.

Michael Bowman SC, defending, told the jury the evidence that the woman was distressed after the date meant nothing.

“Was she equally as upset when she was texting on Tinder? Is she as distressed as she presents to the outside world?” he asked.

The jury heard evidence that texts to and from the accused on Tinder and Whatsapp were deleted.

He also suggested gardaí ­ failed to cross-reference her texts on Tinder with the statement made to gardaí ­ and that had these deleted texts been irretrievable, the accused would be convicted “in a heart beat”.

The man told detectives he met her for “a hook up” and expected “something would happen”.

In her evidence, the woman said the pair agreed to meet for “a spin and a coffee” and he suggested they drive up to a “viewing point” in the mountains.

She said that after a brief kissing session she asked him to “take it easy”.

She told him she didn’t want a “one night stand” and got out of his car after he told her to “get out”. He drove off and she tried to ring a friend but there was no signal.

The car disappeared from sight but returned a few minutes later. The man told her “it’s grand, get in” and she got in because she felt she did not have a choice. She said she did not know where she was and he seemed a bit calmer.

He drove the car back to where they had been and he stopped the car. He turned off the car lights and they were in complete darkness, she said.

He began kissing her again and she told him to take it easy. He leaned over and pulled a lever to drop her seat back and moved quickly to get on top of her before raping her.

She said she told him to stop but she was afraid he was going to “beat the shit out of me” and she eventually stopped resisting.

Defence counsel said gardaí in the case formed a view that “here is a terribly nice young girl up from the country who wouldn’t dare tell a lie” and they did not test her account properly.

“Having deleted the texts, she thought they were gone for good. She thought that gave her free rein to characterise (the accused) any way she wanted.

“How lucky, how blessed is he that there is a capacity to retrieve deleted texts,” counsel said, adding that without this evidence his client would be “convicted in a heartbeat”.

He said the woman had misrepresented the entirety of the relationship and said “she cannot be relied on”.

Lawyers for the DPP told the jury her evidence had the ring of truth and said the man’s statement to gardaí ­ was self-serving.

The man told gardaí he had consensual sex with the woman and said her version of events was wrong. He said she seemed keen to meet up and he found that unusual. He said a few days later, they arranged to meet but she cancelled it and they had a row on Whatsapp.

They then started sexting or exchanging images of a sexual nature. They met in the coming days and went for a coffee in McDonalds.

The man said he then asked her if she wanted to go to a “viewing point” in the Dublin mountains “because we couldn’t do anything there”.

Gardaí ­ asked him if he said that or did she and he replied: “Nobody said it. It was implicit. We were meeting for a hook up.

“In my mindset we were meeting to have sex — that wasn’t necessarily going to happen. Ultimately I met not knowing something would happen but hoping and expecting it would. I suggested we go somewhere private.”

Asked why she would make up an allegation of rape, the accused told gardaí ­ the woman was annoyed with him because he had ejaculated inside her during sex without a condom.

“That started off the mood going sour between us. She didn’t tell me to pull out. I thought she was on the pill or something.”

The accused said: “I did no harm to that girl, I guarantee there is not a mark to that girl”.

He said she had taken her own jeans off. He said if she had done this she would be “covered in bruises”.

He said that after he had ejaculated inside her “she wasn’t impressed” and they had a “disagreement”.

“I would have been apologising. She said I thought you would have pulled out yourself,” he said. He said he wanted to hold her but felt “rejected by her”.

He said they continued talking as he drove her home, saying “I imagine if someone had been raped, they would be in an absolute state of panic and fear”.

The jury began deliberating on Wednesday afternoon and resumed its third day of deliberations on Friday morning.

Just after midday, Mr Justice Butler informed the jurors they could return a majority verdict, meaning one which 10 or more of them are agreed on. They returned a verdict just before 3pm.

1 One hundred Irish retailers for all your online Christmas shopping
2 Covid-19: Backlog forces HSE to skip calls to thousands of close contacts
3 School ordered to reopen after closing due to Covid-19 fears
4 Suzanne Lynch’s US Election Diary: Trump ‘walks out’ of TV interview at White House
5 Covid-19 Explainer: Why is the contact tracing system getting swamped?
Real news has value SUBSCRIBE