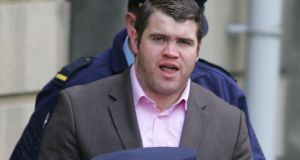 Brian Rattigan leaving court in August 2001 after he was found guilty of the murder of Declan Gavin. Photograph: Collins Courts

A 38-year-old Dubliner in prison for most of his adult life has asked forgiveness from the mother of the man he killed in 2001 ahead of being sentenced for his manslaughter next month.

A prosecutor earlier told a court that the DPP had accepted a plea to manslaughter from Brian Rattigan, who was previously convicted of murdering the 21-year-old, due to the ‘exceptional features’ of the case.

Pauline Walley SC was addressing the Central Criminal Court on Thursday during his sentence hearing for killing his former friend, Declan Gavin.

Mr Gavin was stabbed to death outside an Abrakebabra on Crumlin Road in Dublin in the early hours of August 25th, 2001. He received two knife wounds, one to the hand but a fatal one to the heart.

Rattigan went on trial for his murder twice in 2009. The first jury could not reach a verdict but a second jury convicted him. However, that conviction was successfully appealed last year.

The former gangland figure was due to go on trial for the crime again next month, but the State accepted his plea to manslaughter when he entered it on arraignment in October.

He was back before the court for his sentence hearing. Four prison officers wearing stab vests remained nearby.

Ms Walley reminded Mr Justice Michael White the accused had pleaded not guilty to murder but guilty to manslaughter.

“The prosecution indicated that, given the exceptional features now associated with this case, the director would accept this plea to manslaughter because of those features,” she said.

Chief Superintendent Brian Sutton agreed with Ms Walley that the case had ‘a complex litigation history’. Various judicial reviews had been taken from 2005 to 2008 before the two trials got underway in 2009.

Chief Supt Sutton spent much of the afternoon summarising the facts of the case. These included a man in a balaclava being witnessed stabbing Mr Gavin, who retreated into the safety of Abrakebabra. The evidence against Rattigan included his prints being found next to Mr Gavin’s blood on the restaurant’s door, through which he had tried to chase his victim.

Chief Supt Sutton said that over 300 witness statements were taken as part of the investigation. However, it was a difficult investigation, he said.

“Over 22 people were arrested for withholding information,” he explained.

Rattigan had denied involvement, insisting that he hadn’t been to the scene in months. “I won’t admit. You prove it. That’s your job,” he had said.

He was eventually charged in 2003, but this was struck out of the District Court later that year for failure to serve the book of evidence.

“It was a complex investigation and took a while to get the book of evidence together,” explained Chief Supt Sutton, adding that there was a large number of very reluctant witnesses.

He was re-charged in 2005 but took judicial review proceedings seeking an order of prohibiltion.

Rattigan argued that there had been both an unacceptable delay and prejudical pre-trial publicity, which would prevent a fair trial.

He lost his case the following year but appealed to the Supreme Court.

The Supreme Court agreed that there was a delay but found that the forensic evidence of blood and prints were extraordinary, exceptional and unexplained, and cried out to be examined.

The court also took the view that there would be a media ‘fade factor’ by the time his case came to court and that this would allow him a fair trial. It ruled in 2008 that the trial could proceed.

Chief Supt Sutton said that a feature of both trials was that some key witnesses professed to no-longer remember what they’d stated to gardai.

Some did not make themselves available and had to be arrested. Others left the jurisdiction. Some were charged with contempt and their statements had to be read to the court, using special legal provisions.

One of these statements was described as a key piece of evidence and was made by a friend of both men, David Byrne.

“He was subsequently murdered in the Regency shooting,” said the officer.

Niall Hannigan, another key witness in both trials, is also deceased.

Such witnesses had described Mr Gavin being in good form before the attack. He had been going to leave in a taxi with some girls, but the car was full.

Professor John Harbison, who had carried out the autopsy, was unavailable for the trials due to medical reasons. That was overcome at the time, but was likely to have been a greater problem if the trial had proceeded in 2019.

Despite the difficulties, a jury found him guilty in 2009. He was the last person to be convicted of murder in the Four Courts.

However, he appealed this conviction and the Supreme Court eventually quashed it.

A retrial was ordered earlier this year. It would have begun next month and lasted six weeks, but Rattigan decided to offer a plea to manslaughter.

Chief Supt Sutton agreed that all the frailties mentioned and the passage of time were likely to render the success of the trial questionable. The DPP, therefore, decided to accept the plea.