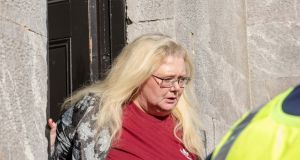 A man who was found lying surrounded by blood in his brother’s house had 28 stab wounds , the trial of a woman accused of his murder heard on Thursday .

Timmy Foley (44) had stab wounds to his head, thorax, abdomen and right leg as well as to his liver and lungs, and a cut to his carotid artery, the Central Criminal Court was told.

Prosecution counsel Siobhán Lankford SC outlined his injuries when she opened the State’s case against his former wife, Rita O’Driscoll (48), who denies his murder and a second charge of assault.

Ms O’Driscoll of Bridge Street, Bandon, is charged with the murder of Mr Foley and assault causing serious harm to his brother, Jason Foley, both at Dan Corkery Place in Macroom, Co Cork, on October 8th, 2018.

Addressing the jury of five men and seven women on what she expected the State to call in evidence, Ms Lankford said Ms O’Driscoll had been admitted to the psychiatric unit at Cork University Hospital on September 21st, 2018.

She said they would hear Ms O’Driscoll had been discharged on October 5th and her psychiatrist would say she was “coherent, calm and relaxed” with no thought of self-harm or suicidal ideation at the time.

Ms Lankford said the State would say Ms O’Driscoll travelled to Macroom on October 5th and went to the home of her former brother-in-law, Jason Foley, who had a brain injury.

She said Ms O’Driscoll called to the house on October 7th and brought alcohol with her and she, Timmy and Jason Foley had some drinks and possibly some food.

“Some time after midnight there was a fracas in the house. I think I am safe in saying there was an argument, pushing, shoving, fisticuffs and so on, a verbal altercation. These exchanges were heated.”

Jason Foley had a panic button because of his condition and he raised the alarm through this at 1.40am on October 8th. Gardaí were alerted and arrived at the house.

“They found a very fraught scene,” Ms Lankford said. “There was a lot of blood. Rita O’Driscoll was outside the house. She was bleeding. She had sustained two stab wounds to her left arm and some cut or laceration to her face.

“In the property there was a lot of blood. Jason Foley was clearly injured. He had sustained stab wounds to the right side of his neck, the base of his lung, his kidney and liver. He had a number of stab wounds.

“Timmy Foley was very clearly extremely unwell. There was a lot of blood around him. He had difficulty breathing. He was still alive when the gardaí arrived. He was mortally wounded. He died that night.”

Both Timmy Foley and Jason Foley were taken to Cork University Hospital. Ms O’Driscoll, who told gardaí she had been attacked, was also taken to hospital.

Ms Lankford said gardaí found blood stains on the inside of a toilet cistern in the bathroom, where they also found a knife and a white Nokia phone.

Forensic examination found that the stains on the cistern matched the blood of Ms O’Driscoll with a minority blood match to Timmy Foley.

The blood on the knife showed a DNA match with Ms O’Driscoll and Timmy Foley, said Ms Lankford, adding that the postmortem found some of Mr Foley’s wounds were defensive.

Earlier, Ms Lankford had told the jury and Ms Justice Eileen Creedon that the case was expected to last two to three weeks.