Chip pan ‘most likely’ cause of Carrickmines fire which killed 10 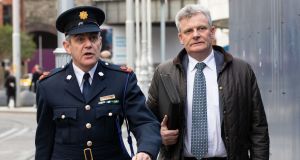 A chip pan left on a hot plate was the most likely cause of a devastating fire that claimed ten lives at a Dublin halting site in 2015, an inquest into the deaths has heard.

Investigators examined an electric cooker at the scene of the fire and they found that a chip pan had been left on a hot plate on full power.

The fire broke out in the early hours of October 10th 2015 at the Glenamuck halting site in Carrickmines, south Dublin.

Detective Inspector Martin Creighton told an inquest into the deaths that the cause of the fire was the primary focus initially. Once this was identified, the investigation moved to examine how the fire spread to a neighbouring unit.

Dublin Coroner’s Court heard the two units destroyed by the blaze were situated one metre apart on a temporary emergency halting site off the Glenamuck Road.

The scene was officially preserved by gardaí for a period of 26 days from October 10th until November 4th, Det Insp Creighton told the court. He said gardaí followed hundreds of lines of inquiry, took 200 statements and examined CCTV footage.

The jury at the inquest viewed drone footage of the charred remains of the site where firemen could be seen sifting through the debris.

The site was not subject to any planning or accommodation guidelines due to its temporary nature. Dun Laoghaire Rathdown County Council (DLRCC) prepared the site with ground works and provided electricity, water, toilet and washing facilities and waste collection. Residents provided their own mobile homes and were responsible for the contents, the court heard.

Prior to moving to Carrickmines, the family had been living in “unacceptable conditions” or a roadside in Sandyford, Co Dublin, former DLRCC Director of Housing Tom McHugh said. The council was obliged to provide accommodation and the site at Glenamuck was the only available land, Mr McHugh said.

“The site was temporary because it could never have been sustainably used because it was severely compromised by the road layout,” Mr McHugh said.

The parcel of land was earmarked for road widening works but the layout was the subject of discussions with developers. The layout was not finalised until 2017. The works have yet to be completed, the court heard.

“It would never have been intended in 2008 for it to go on that long,” Mr McHugh said.

Asked by the coroner if a temporary site was subject to the same regulations as a permanent site, Mr McHugh replied no. “There is an exemption,” he said.

In late 2014, Thomas Connors and his wife Sylvia moved an unauthorised portacabin onto a field at the halting site. The council agreed to accommodate the family. A sketch was made of where the unit would be placed and groundworks were carried out.

There was no involvement from architects, planners or engineers since the site was not subject to regulations, the court heard. The unit was placed one metre away from a neighbouring dwelling in accordance with the owner’s wishes.

“We didn’t think there was any safety issues with it,” former senior staff officer Conor Peoples said. The optimum safe distance between units is six metres, the court heard.

The inquest heard details of electrics that were “tampered with so badly” they were deemed unsafe. Electrical contractor Karl Fortune gave evidence of cables taped together, exposed wires, signs of burning and overload and an extension lead lying on a wet tiled floor.

Electrical upgrade works were carried out in May 2015. Fire safety equipment including fire extinguishers, fire blankets and smoke alarms were provided at the site.

The inquest continues on Tuesday, with evidence from family members and from a taxi-driver who came upon the fire.