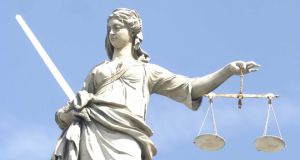 Sean Stewart, from Drumaveg, Moycullen, Galway, pleaded guilty before Galway Circuit Criminal Court to a single charge of having images and movie files of children aged between three months and 17 years, posing naked or engaging in sexual activity, stored on his laptop, on his two mobile phones and on a USB memory stick at a house he was renting in Gort na Glaise, Sandy Road, Galway, on November 27th, 2013, contrary to Section 6 (1) of the Child Trafficking and Pornography Act, 1988.

A 29-year-old man has been sentenced to three years in prison with the final 18 months suspended for having video and photographic images of children and babies, some as young as three months being sexually abused.

Sean Stewart, from Drumaveg, Moycullen, Galway, pleaded guilty before Galway Circuit Criminal Court last week to a single charge of having images and movie files of children aged between three months and 17 years stored on his laptop, on his two mobile phones and on a USB memory stick at a house he was renting in Gort na Glaise, Sandy Road, Galway, on November 27th, 2013, contrary to Section 6 (1) of the Child Trafficking and Pornography Act, 1988.

Det Sgt James Tierney told the sentence hearing on Wednesday he and Det Sgt Paul Johnston of the Garda Computer Crime Unit, based in Dublin, called to Stewart’s house and seized the laptop, his two mobile phones and the memory stick on November 27th, 2013.

He said Stewart freely admitted he had stored images of child abuse material and video clips on all of the devices.

He gave gardaí the necessary codes and passwords so that they could access the material.

Stewart was arrested that morning and later freely admitted during his detention that he had downloaded the material from websites.

Det Sgt Tierney said the devices contained 5,075 of the images, along with 476 video files of children between the ages of three months and 15 years, naked or being subjected to sexual activity with adults and other children.

He said the accused was unemployed and now living at home with his mother. His father had passed away in 2009.

Det Sgt Tierney said Stewart had three previous convictions, including two in 2011 when he received a two-year suspended sentence in relation to two charges of having sex with a child.

The period of the suspended sentence in relation to the first two offences has expired, the court was told.

He gave gardaí the email addresses and passwords he used to access the material on the internet, and co-operated fully in the investigation.

Stewart’s mother, his two brothers and a male family friend were all in court to support the accused, Mr Condon said.

Det Sgt Johnston, who viewed the material, placed the activity involving the children on the upper scale of gravity.

He said the vast majority of the images were of young children naked with their genital areas exposed, but there were hundreds of images and videos of children engaging in “sexual activity” with other children and with adults.

In reply to Judge Rory McCabe, Det Sgt Johnston said the images were downloaded by Stewart, mostly by paying a subscription or in some cases by invitation.

“There are very few images that are freely available from these websites,” he said.

“The vast majority [of the images] belong to forums he was invited to join or had asked to join.”

Mr Condon said Stewart was the middle son of three sons and he had moved back home to Moycullen where he was receiving good family support.

He said Stewart had worked for a carpet-fitting company after leaving school and had worked in shops around Galway city.

He had done a Fás course to train as a receptionist but was currently unemployed.

Prosecuting barrister Conor Fahy said the maximum sentence for this offence was five years in prison and/or a €5,000 fine.

Judge McCabe said Det Sgt Johnson had said the images he had viewed were at the upper end of the scale of gravity, and that was uncontroverted evidence given to the court.

The offence, he said, warranted a four-year sentence, given that Stewart had previous convictions for having sex with a child, but taking his early plea and his co-operation with gardaí into account, the judge said the appropriate sentence was three years.

“It may be that he has an addiction issue - even though there is no evidence of that - because it’s hard to understand how a person with a good education and a good family background could get involved in this,” he said.

“It’s hard to understand how, when he had been involved in criminal wrongdoing involving a child in the past and had been sentenced, that he would have reoffended if there was not some sort of an underlying problem of an addictive nature.

“However, I do not have any evidence of that - and a custodial sentence is unavoidable.”

He sentenced Stewart to three years in prison, and suspended the final 18 months for three years, to act, he said, as a deterrent and in the hope that he would seek assistance while in custody.

“It may be that he actually needs help and doesn’t realise it,” the judge added before granting an order to gardaí to destroy the abuse material.