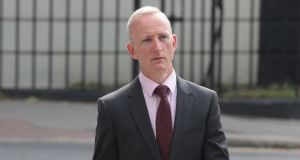 Cahir O’Higgins arriving at the Criminal Courts of Justice on Parkgate Street in Dublin for a court appearance on Friday. Photograph: Collins Courts

A criminal defence solicitor accused of theft and perverting the course of justice wants to meet the case head on and “reclaim his reputation”, a court has heard.

Mr O’Higgins has been charged with stealing €400, the property of Raul Sanz Quilis, at Londis, Parkgate Street, Dublin on July 30th, 2016.

He has also charged with four counts of perverting the course of justice in December 2017, by giving Detective Garda Colm Kelly a copy of notes purportedly made on July 30th, 2016 when he knew they were not made on that date.

He denies the charges.

Mr O’Higgins, with an address at his company on Parkgate Street, Dublin, was seeking the earliest trial date possible, his barrister Karl Monahan BL told the court.

“This prosecution has had a devastating impact on his personal and professional life,” Mr Monahan said. “He wants to meet the case head on and reclaim his reputation.”

Judge Martin Nolan said that there was a backlog of “dozens” of custody cases, which must take precedence over those who are on bail while awaiting trial.

Due to the Covid crisis and the backlog of cases before the courts, only cases involving senior counsel are being given pre-trial hearings. Mr O’Higgins will be defended by Michael O’Higgins SC, the court heard, while Ronan Kennedy SC is prosecuting the case.

Mr Kennedy asked for leave to mention the case in October should “another matter” arise. Judge Nolan agreed.